Duterte is not off the hook with withdrawal from ICC —Tinio 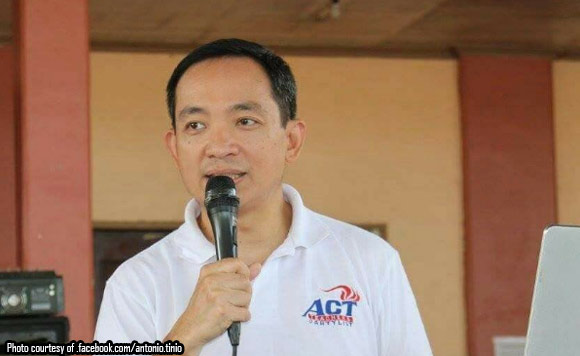 0 872
Share
Want more POLITIKO News? Get the latest newsfeed here. We publish dozens and dozens of politics-only news stories every hour. Click here to get to know more about your politiko - from trivial to crucial. it's our commitment to tell their stories. We follow your favorite POLITIKO like they are rockstars. If you are the politiko, always remember, your side is always our story. Read more. Find out more. Get the latest news here before it spreads on social media. Follow and bookmark this link. https://goo.gl/SvY8Kr

ACT Teachers partylist Rep. Antonio Tinio said President Rodrigo Duterte’s announcement that he is withdrawing the Philippines as a state party to the Rome Statute would not save him from being prosecuted for crimes against humanity.

The Makabayan lawmaker said the announcement was “utterly self-serving” and showed how Duterte “is driven by sheer panic at the prospect of a trial before the International Criminal Court for crimes against humanity related to his murderous war on drugs.”

Duterte is facing a complaint for the mass murder of thousands of drug suspects in the government’s drug war before the ICC.

“Saving his own skin has taken precedence over the long-term international commitment made by the Philippine State to human rights and against impunity when it became a party to the Rome Statute,” Tinio said.

But he said Duterte “won’t save himself from ICC investigation by withdrawing the Philippines as a State Party to the Rome Statute.”

He cited Article 127 of the Rome Statute, on withdrawal, which states that the withdrawal shall come into effect one year after receipt of notice. It further provides that:

“In short, since the ICC has already commenced with proceedings regarding President Duterte’s war on drugs, it has the authority to proceed and the Philippine government has the obligation to cooperate with an investigation, regardless of the notice of withdrawal,” Tinio said.

“Whether he likes it or not, he will be held accountable,” he said.