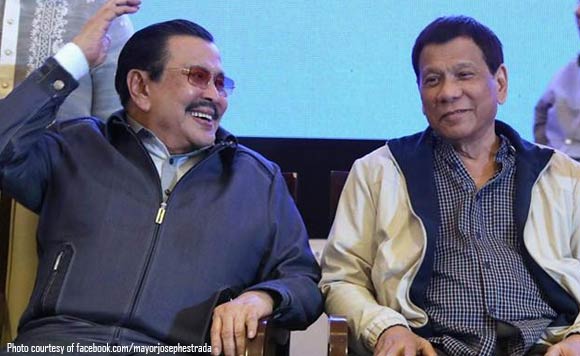 The politiko urged his fellow city and municipal mayors to continue to fight illegal drugs amid the looming barangay and Sangguniang Kabataan elections.

Estrada said the public must reject barangay officials and candidates linked to illegal drugs who will run in the local polls on May 14.

“Let’s protect the children, the youth … they are our future. We are one with PDEA chief Director General Aaron Aquino’s call not to vote barangay officials linked to illegal drugs,” he said.

The Philippine Drug Enforcement Agency claimed there are 143 village chiefs and 146 village councilors involved in the illegal drugs trade.

“The President has been doing an excellent job in fighting the narco-politicians and corruption in government,” Estrada said.

He stressed that traffickers and operators of big-time drug laboratories have “managed to run their illegal drug trade unhampered in the past decades because government officials in power are protecting them.”

“This is the time to jail all drug traffickers. The key to success and improve the economy is to eliminate illegal drugs and corruption,” he said.