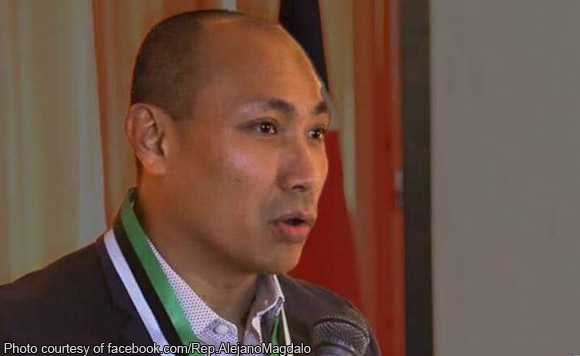 0 1,100
Share
Want more POLITIKO News? Get the latest newsfeed here. We publish dozens and dozens of politics-only news stories every hour. Click here to get to know more about your politiko - from trivial to crucial. it's our commitment to tell their stories. We follow your favorite POLITIKO like they are rockstars. If you are the politiko, always remember, your side is always our story. Read more. Find out more. Get the latest news here before it spreads on social media. Follow and bookmark this link. https://goo.gl/SvY8Kr

Magdalo partylist Rep. Gary Alejano on Tuesday said the dismissal by the Department of Justice of the charges against alleged drug lords Kerwin Espinosa and Peter Lim showed how unreliable President Rodrigo Duterte’s drug list had turned out to be.

The Magnificent 7 lawmaker noted that the basis for the alleged involvement of Espinosa and his father, Mayor Rolando Espinosa of Albuera, Leyte, in the illegal drug trade was the drug list presented by Duterte.

“The Department of Justice’s dismissal of the complaint due to lack of evidence is short of admitting that the drug list of Duterte is unfounded and unreliable,” he said in a statement.

“Marami na ang napatay ng dahil sa listahan na ito ng Pangulo. The father of the now-absolved Kerwin Espinosa was among these many deaths. It turns out these were arbitrary killings,” Alejano said.

“Further, if we put such picture of exoneration of high-profile drug personalities against the killing of thousands of small-time drug users mostly from the poor, it is becoming more apparent what a huge hypocrisy the drug war policy of Duterte is,” he said.

“Big-time drug lords are acquitted, while poor small-time drug users face death at an instant. This is supposedly how the ‘justice’ system works under the Duterte administration,” Alejano said.