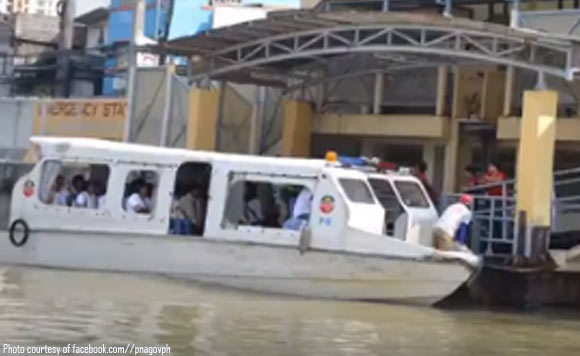 Campos said the Department of Transportation (DOTr) should move in and operate the water buses along the river using low-cost funding from China.

“Since nobody from the private sector is prepared to establish a permanent ferry service, then the government itself, through the DOTr, should acquire and run the commuter boats,” the politiko said.

Campos asked the Department of Finance (DOF), together with the DOTr, Pasig River Rehabilitation Commission (PRRC) and the Metro Manila Development Authority (MMDA), to include a Pasig River water bus project in the next batch of ventures for Chinese concessional funding.

The Philippine and Chinese governments recently agreed to jointly identify and study an indicative list consisting of the second basket of key cooperation projects for possible Chinese financing.

Beijing has so far pledged some $7.34 billion in grants and low-interest loans to be spent mostly on building new infrastructure in Manila.

“While we are fighting motor vehicle traffic jams, we simply cannot ignore the fact that the Pasig River freeway is always there for us to harness as a means to efficiently convey commuters,” Campos said.

The MMDA has since been running an improvised and limited ferry service.