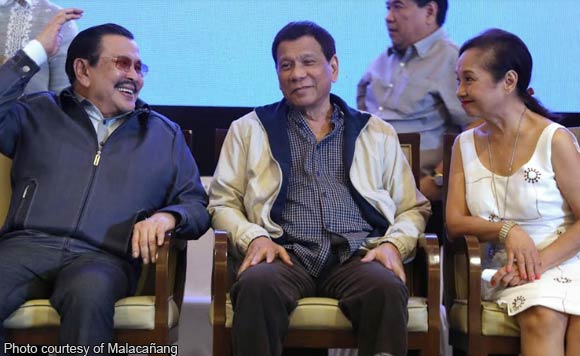 0 1,857
Share
Want more POLITIKO News? Get the latest newsfeed here. We publish dozens and dozens of politics-only news stories every hour. Click here to get to know more about your politiko - from trivial to crucial. it's our commitment to tell their stories. We follow your favorite POLITIKO like they are rockstars. If you are the politiko, always remember, your side is always our story. Read more. Find out more. Get the latest news here before it spreads on social media. Follow and bookmark this link. https://goo.gl/SvY8Kr

Former President Joseph Estrada made an effort to travel to Clark, Pampanga Wednesday (March 8) to be with President Rodrigo Duterte in his meeting with local politikos.

At first glance, Estrada’s presence at the event doesn’t seem to be much of a big deal since he’s on good terms with Duterte anyway.

A closer look, however, would show that the former President is exerting all efforts to court Duterte’s favor amid looming threats to his family’s control of San Juan City and Manila.

The acceptance of these politikos into PDP-Laban sets the stage for their showdown with Estrada and his family members in 2019.

Estrada has been vocal about his plan to run for a third term in 2019, and with Lim in PDP-Laban, it’s a certainty that he will be fielded as the mayor’s opponent.

The Zamoras, meanwhile, are poised to snatch the control of San Juan City from the Estradas, with Francis seen to run against Mayor Guia Gomez.

Given these developments, Estrada appears to be going the extra mile to ensure he and his family members get Duterte’s support even though they’re not members of the ruling party.