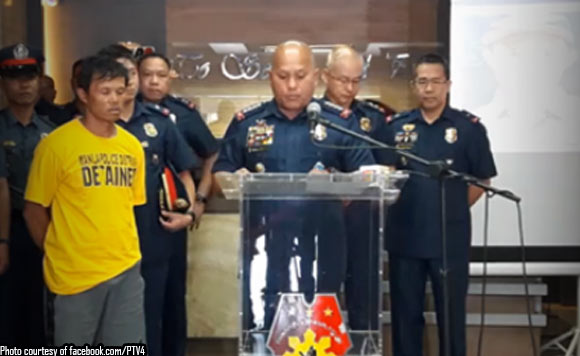 A key leader of the Islamic State-linked Maute terror group which took part in the five-month long siege of Marawi City was presented by police officials to the media Monday after he was arrested in Divisoria by elements of the Manila Police Department working with military intelligence officers over the weekend.

Spouses Abdul Nasser and Raisalam Lomondot, both from Lanao del Sur were arrested along C. M. Recto Ave. in Divisoria, Manila on Saturday while in possession of a grenade and a handgun.

“We are able to send a message to the Maute that you can run but you cannot hide. The long arm of the law will catch up with you,” Philippine National Police Director General Ronaldo dela Rosa said of the development during a press briefing.

The PNP chief added that similar operations to go after members of the terror group who have managed to slip into Manila are ongoing.

“Mayroon tayong hinahanap pero hindi natin pwede sabihin kung ilan at kung sinu-sino.(We are looking for suspects but we cannot disclose how many and who they are.) Continuous ang ating effort diyan (Our efforts on that matter are continuous),” he added.

Police officials said Lomondot is a sub-leader of the Maute Group who took part in the attack of a Civilian Active Auxiliary (CAA) detachment in Barangay Mantanpoli Marantao, Lanao del Sur at the height of the Marawi siege last year. He underwent training at a local IS camp in Butig, Lanao del Sur.

The couple was presented before the prosecutor for inquest proceedings for charges of illegal possession of firearms and explosives.

Dela Rosa clarified the sheer size of the island of Mindanao facilitated the escape of some of the Maute terror group members.

“We lacked in our efforts when they managed to go out of Mindanao, but in fairness to our security forces in Mindanao, we cannot cordon off the whole island. They are leaving one by one,” Dela Rosa pointed out when asked why Lomondot slipped through the numerous checkpoints set up on roads leading out of Marawi.

Coronel said Lomondot traveled to Manila by land while using a fictitious name.

“He came here under an assumed name but through our efforts and coordination of different intelligence agencies we were able to identify him. That is our problem they are traveling under an assumed identity and only after reports have been verified that is the only time we can neutralize them,” Coronel explained.

Coronel added that before the Marawi incident, Lomondot was seen participating in the Maute atrocities in different parts of Lanao del Sur.

“(W)hen the ISIS-affiliated groups took over part of Marawi he was also seen and observed in the area,” he noted.

Dela Rosa added that there was no official policy to assume all Manila-based Maranaos were sympathizers of the terror group’s cause and coddlers of terrorists.

“It doesn’t mean that if he is an ISIS Maute member, he is coming here for terrorism. That is different. Juan’s fault is not Pedro’s fault. Their relatives here whom they are visiting are legitimate entrepreneurs but because of blood relationship, as part of Filipino culture, you accommodate your relatives. It doesn’t mean that they are intentionally harboring terrorists,” he explained in Filipino.

The PNP chief added that the matter should be considered on a case to case basis.(PNA)