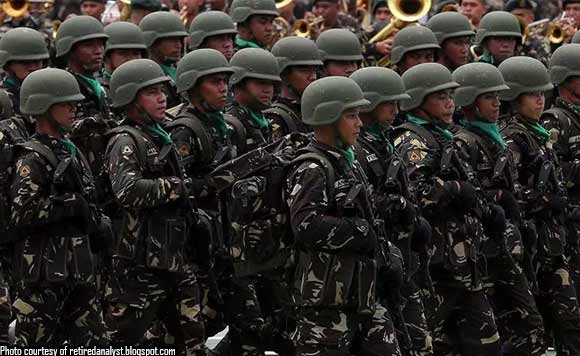 0 908
Share
Want more POLITIKO News? Get the latest newsfeed here. We publish dozens and dozens of politics-only news stories every hour. Click here to get to know more about your politiko - from trivial to crucial. it's our commitment to tell their stories. We follow your favorite POLITIKO like they are rockstars. If you are the politiko, always remember, your side is always our story. Read more. Find out more. Get the latest news here before it spreads on social media. Follow and bookmark this link. https://goo.gl/SvY8Kr

The Philippine Army (PA) on Monday announced that it was opening 6,100 slots in line with efforts to strengthen its field units.

“The Army recently approved the opening of 3,600 annual regular quota and an additional 2,500 for 2018. There is now a total of 6,100 slots opened. Out of the total number of recruits, 5 percent is allocated for female recruits and another 5 percent from the indigenous peoples,” PA spokesperson Lt. Col. Louie Villanueva said.

He added that additional recruits would be filling up the troop requirements for the conceptualized activation of 10 new Infantry Battalions and one Scout Ranger Battalion.

“As of today, seven out of the 10 Infantry Battalions and the Scout Ranger Battalion have already been activated. These additional Army units aim to further strengthen the Army’s capability in addressing the various threats, particularly terrorism besetting the country,” Villanueva pointed out.

The recruitment is now on-going and the training will start not later than June 2018. Interested applicants may visit the Army recruitment centers located in Cagayan De Oro City, Cebu City, and Fort Bonifacio, Taguig City. Also, interested individuals may also browse the PA website or visit the nearest Army base in their respective localities for inquiries and other details.

“With the current efforts of the Army to further build up its force, there is a good opportunity that has been opened for our youth and everyone who would like to serve the country. Soldiery is a noble profession that is not only different and worthwhile, but also offers continuous growth and career development,” Villanueva stressed. (PNA)