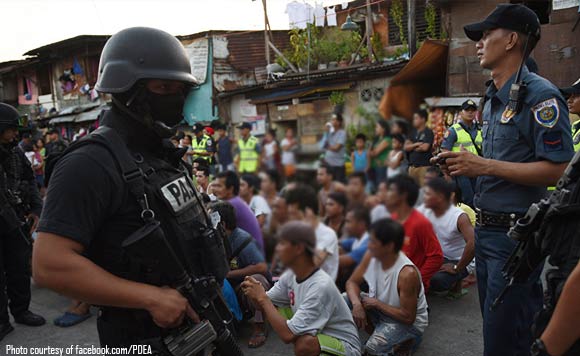 0 974
Share
Want more POLITIKO News? Get the latest newsfeed here. We publish dozens and dozens of politics-only news stories every hour. Click here to get to know more about your politiko - from trivial to crucial. it's our commitment to tell their stories. We follow your favorite POLITIKO like they are rockstars. If you are the politiko, always remember, your side is always our story. Read more. Find out more. Get the latest news here before it spreads on social media. Follow and bookmark this link. https://goo.gl/SvY8Kr

The Philippine Drug Enforcement Agency (PDEA) has reported that 5,324 out of 42,036 or 12.6 percent barangays in the country have been cleared of drugs in line with the government’s ongoing anti-narcotics campaign.

Aquino said for 2018, the agency targets to clear 7,328 barangays from illegal drugs, or a projected average of 617 barangays per month.

“PDEA has committed itself to clear the remaining 24,424 drug-affected barangays nationwide by 2022. These barangays represent 58.10 percent out of 42,036 barangays in the country that are still plagued by the drug menace,” he said.

Of the 24,424 drug-affected barangays, 15,290 are classified as slightly affected, 9,089 are moderately affected, while 45 are seriously affected.

The National Capital Region has the highest rate of barangay drug-affectation with 95.37 percent, followed by Region 9 (Zamboanga Peninsula) at 93.47 percent, Region 7 (Central Visayas) at 88.78 percent, Region 3 (Central Luzon) at 84.01 percent, and Region 8 (Caraga) at 82.38 percent. The regions least affected by illegal drugs are Region 5 (Bicol) at 16.59 percent, and the Cordillera Administrative Region at 0.68 percent.

“PDEA is faced with many challenges. Foremost is thousands of barangays have yet to activate its Barangay Anti-Drug Abuse Council (BADAC) while almost the same rate of local government units have inactive municipal and local anti-drug abuse councils,” Aquino added.

He said PDEA has tapped the Philippine National Police, local health and social welfare offices in the ongoing anti-drugs campaign.
“We are happy that the Department of the Interior and Local Government (DILG), particularly the Office of Assistant Secretary Rico Judge Echiverri, is in constant cooperation with us and committed that they will help in the activation of all BADACs and ADACs in the whole country,” Aquino said.

Meanwhile, the 5,324 barangays have reached drug-cleared status after the issuance of a certification by members of the Oversight Committee on Barangay Drug-Clearing Program.
The Oversight Committee, which is chaired by PDEA, is composed of provincial representatives of the DILG, PNP, Department of Health, and local government units.

Before declaring that a barangay is free from illegal drug activities, the committee must convene and validate the non-availability of drug supply in the area and the absence of drug transit activity, clandestine drug laboratory and chemical warehouse, marijuana cultivation site, drug den, drug pusher and user.

“Once cleared, we must ensure that drug-free barangays will maintain their status. All our efforts will go to waste if we allow the resurgence of illegal drug activities in these areas,” Aquino said.

“To accelerate efforts against the proliferation of illegal drugs in drug-affected barangays, the government has adopted an integrated approach in securing the assistance of the local government units in drug-clearing operations,” the PDEA chief said, citing Dangerous Drugs Board Regulation No. 3 Series of 2017, otherwise known as “Strengthening the Implementation of the Barangay Drug-Clearing Program”. (PNA)