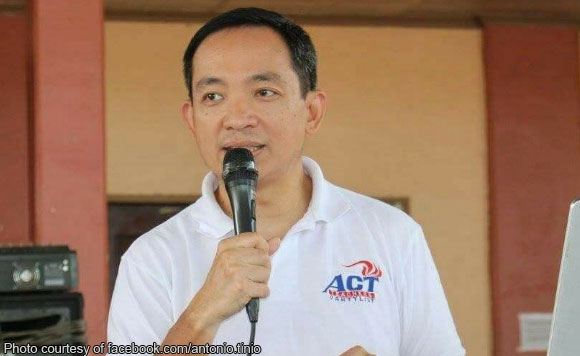 0 1,027
Share
Want more POLITIKO News? Get the latest newsfeed here. We publish dozens and dozens of politics-only news stories every hour. Click here to get to know more about your politiko - from trivial to crucial. it's our commitment to tell their stories. We follow your favorite POLITIKO like they are rockstars. If you are the politiko, always remember, your side is always our story. Read more. Find out more. Get the latest news here before it spreads on social media. Follow and bookmark this link. https://goo.gl/SvY8Kr

Instead of acting as the chief architect of Philippine foreign policy, President Rodrigo Duterte is serving as the “principal agent of Chinese economic, political, and military expansion in the Philippines,” according to ACT Teachers partylist Rep. Antonio Tinio.

“At the outset, President Duterte said that the favorable ruling by the Permanent Court of Arbitration affirming the Philippines’ sovereign rights in the West Philippine Sea would ‘take a back seat’ for the sake of closer ties with China,” he said in a statement.

“Subsequently, he has not only failed to protest but has actually justified the build-up of Chinese military installations in the area. Following his so-called joke that the Philippines should become a province of China, Duterte has indicated his openness to China’s offer of ‘joint exploration’ of the resources in the West Philippine Sea, describing it as a form of ‘co-ownership’,” Tinio said.

He said Duterte’s latest pronouncement indicates that Duterte “is prepared to give away our national patrimony in the West Philippine Sea as enshrined in the Constitution and recognized by international law.”

“Far from placing it in the ‘back seat,’ Duterte is prepared to throw the favorable international court ruling in the gutter,” Tinio said.