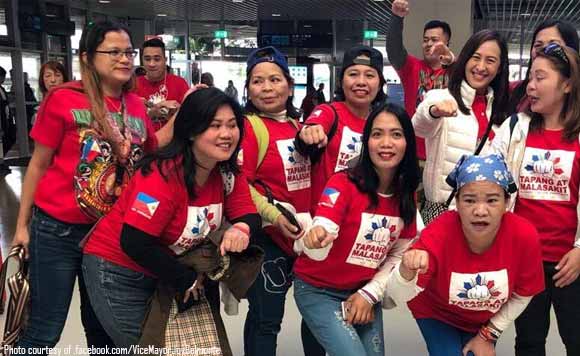 0 744
Share
Want more POLITIKO News? Get the latest newsfeed here. We publish dozens and dozens of politics-only news stories every hour. Click here to get to know more about your politiko - from trivial to crucial. it's our commitment to tell their stories. We follow your favorite POLITIKO like they are rockstars. If you are the politiko, always remember, your side is always our story. Read more. Find out more. Get the latest news here before it spreads on social media. Follow and bookmark this link. https://goo.gl/SvY8Kr

Belmonte had an opportunity to know the OFWs, particularly those from Quezon City, in Hong Kong and Macau when she joined the recent trip of “Tapang at Malasakit” Alliance led by Davao City Mayor Sara Duterte-Carpio.

“OFW concerns are among the priority measures of the President [Rodrigo Duterte] so Mayor Sara went there to explain these new programs for the OFW sector, and also to thank them for their support to President Duterte,” the lady politiko related.

“Basically, I got to talk to a lot of them and I have validated what they really need. I have talked to some of the OFWs there, and many of them are from Quezon City,” she added.

She noted that the trip further motivated her to look into the concerns of OFWs particularly the well-being of their families, their meager compensation and their abusive employers.

“They told us financial literacy is something they need to learn, and (they said) the children they have left behind are in sometimes experiencing trauma, or if not, they themselves are the ones being traumatized,” the vice mayor said.

“I really care about them,” she added.

Being an advocate of OFWs’ rights, Belmonte said she facilitated the passage of a city ordinance mandating the establishment of an OFW center that shall handle the concerns of the migrant workers and their families.

She has requested a database of QC residents who are currently working in Hong Kong from the consulate.

“It is because I want to form a group of Quezon City OFWs in Hong Kong and Macau because I think that’s a part of the mandate of our OFW center that, if it’s implemented that’s what we are going to do,” she said.

MMDA open to probe of its no-contact apprehension policy,…

LTO says it’s not planning to replace IT provider