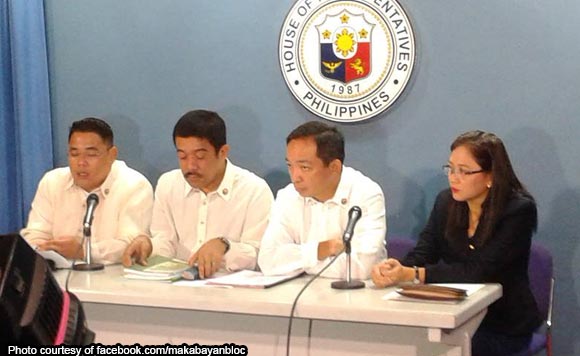 0 2,162
Share
Want more POLITIKO News? Get the latest newsfeed here. We publish dozens and dozens of politics-only news stories every hour. Click here to get to know more about your politiko - from trivial to crucial. it's our commitment to tell their stories. We follow your favorite POLITIKO like they are rockstars. If you are the politiko, always remember, your side is always our story. Read more. Find out more. Get the latest news here before it spreads on social media. Follow and bookmark this link. https://goo.gl/SvY8Kr

In response to the surging prices of commodities brought about by the tax reform package, members of the Makabayan bloc filed on Monday two House bills raising the monthly salary of nurses and government employees.

In a statement, the group said it sought the pay hikes in response to the “wide and strong clamor of government workers and nurses amidst the rising cost of living.”

“These salary bills will help cushion the impact of the Tax Reform for Acceleration and Inclusion (TRAIN) and the skyrocketing prices of basic commodities that also badly hit ordinary government employees and nurses. While the AFP and the PNP personnel now have double salaries, the salaries of state workers and nurses remained despicably low,” Zarate said.

“It is high time that other government employees like teachers and nurses should have higher salaries,” he added.

“We hope that these bills will be prioritized and fast tracked by the House leadership so as to lighten the burden of government employees who are in the front line of serving our people,” Zarate said.