IS commander charged for illegal possession of firearms, bombs 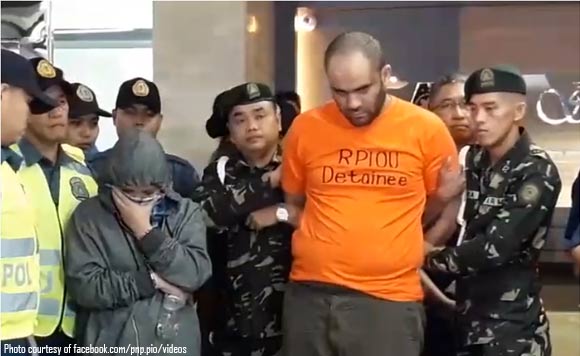 0 1,547
Share
Want more POLITIKO News? Get the latest newsfeed here. We publish dozens and dozens of politics-only news stories every hour. Click here to get to know more about your politiko - from trivial to crucial. it's our commitment to tell their stories. We follow your favorite POLITIKO like they are rockstars. If you are the politiko, always remember, your side is always our story. Read more. Find out more. Get the latest news here before it spreads on social media. Follow and bookmark this link. https://goo.gl/SvY8Kr

The Philippine National Police (PNP) filed criminal charges before the Department of Justice (DOJ) on Monday against an Egyptian national tagged by authorities as a “commander” of international terrorist group Islamic State.

Fehmi Lassqued and his Filipina live-in partner Anabel Salipada were brought to the DOJ for inquest proceedings as they were charged with illegal possession of explosive devices and firearms filed by Regional Police Intelligence Operations Unit (RPIOU) of the National Capital Region Police Office.

The charge sheet signed by Supt. Carlito Narag Jr., RPIOU chief, sought the indictment of the suspects for violations of Republic Act 10591 and RA 9516, laws on illegal possession of firearms and explosives, respectively.

The two were arrested in Ermita, Manila on Friday by joint operatives of PNP and Philippine Army.

They were arrested pursuant to a search warrant issued by the Makati City Regional Trial Court.

It cited as evidence the explosive devices seized from the couple during their arrest, including four pipes, two batteries, three capacitors, two integrated circuits, three battery clips and 11 resistors and also the .45-caliber pistol and ammunitions recovered from them.

During the inquest proceeding, Senior Assistant State Prosecutor Peter Ong said the two met their lawyer from the Public Attorney’s Office (PAO) and decided to execute a waiver to their arbitrary detention and proceed with the preliminary investigation.

Ong set the preliminary investigation on Feb. 28 for submission of counter affidavit of the respondents.

“They decided to execute a waiver and to submit their counter-affidavit next week Wednesday (February 28),” Ong said.

Lassqued was presented to the public by PNP chief Ronald dela Rosa earlier in the day.

Dela Rosa earlier said Lassqued was an ISIS commander and recruiter for the international terrorist group who entered the country in July 2016 using a forged Tunisian passport.

But Lassqued denied the allegations and said he was “forced to say” that he was an ISIS member.

“The police put for me many weapons. I don’t know what it is and they say to me you just say this is yours and forced me to do that,” he said.

But he admitted that his passport was indeed fake but he clarified he has no plans or motive to do anything bad in the Philippines.

Lassqued has been staying in the Philippines since July 2016 and has been traveling in and out of the country using a fake Tunisian passport . (PNA)