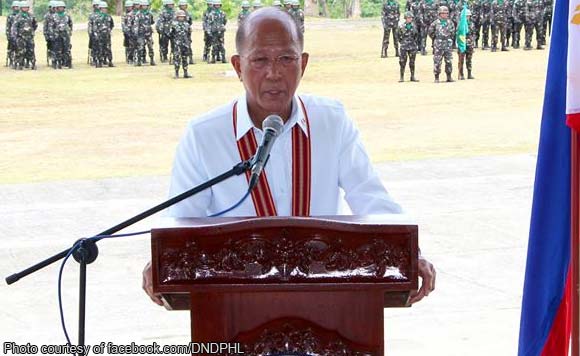 In a statement, Lorenzana said HRW has “always been unreasonably critical of and biased against the AFP (Armed Forces of the Philippines) and PNP (Philippine National Police).”

“It stays silent even when the NPA (New People’s Army) goes on a killing rampage while quick to accuse Philippine law enforcement agencies of trumped-up or unconfirmed violations,” he said.

He questioned how come the HRW did not lift a finger when Communist Party of the Philippines (CPP) founder Jose Maria Sison ordered communist rebels to kill one soldier per region every day.

“When the NPA beheaded a former comrade of theirs who had just returned to the fold of the law, the HRW was silent,” he said.

“Why did the HRW not say anything when the NPA killed a father and his son—Lumad leaders who attended a Lumad Summit with the President? Where was the HRW when the NPA was burning left and right the equipment of public companies for not acceding to their extortion demands??” he asked.

Based on its behavior, Lorenzana said “it is obvious that the HRW is acting as the spokesperson of the CPP-NPA.”

He also stressed that President Duterte offered the bounty only after Sison ordered his men to kill one soldier in 17 regions a day.

“In the interest of neutrality, objectivity, and the truth, we strongly urge the HRW to stop its hypocrisy and, instead, do the right thing by acknowledging and investigating these glaring atrocities being committed by the NPA including the murder of innocent civilians, who resist their aggressive exploitation, and the deceptive recruitment of our indigenous population,” he said.

“The government will do everything in its power to protect our communities and uphold the rule of law,” he added noting that neutralizing rebels and terrorists is a “legitimate law enforcement function.”