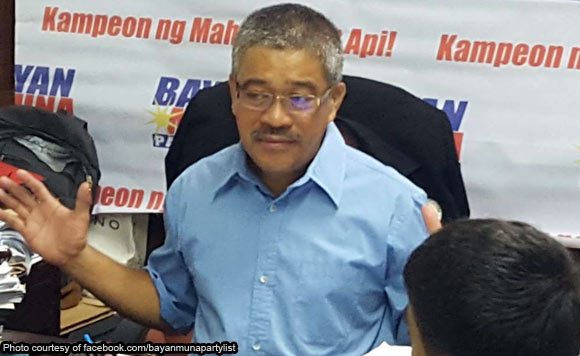 Bayan Muna Rep. Carlos Zarate has been charged for allegedly leading a group of protesters during the Association of Southeast Asian Nations (Asean) to charge toward police which injured a police officer deployed to the protest.

A subpoena was served to Zarate over a complaint filed by PO1 Ariel Miranda Ortega charging him with direct assault, resistance and disobedience to a person in authority and violation of the Public Assembly Act of 1985.

The subpoena directs Zarate to file a counter-affidavit with the Office of the City Prosecutor of Manila on January 29 at 1:30 p.m., however, it was only served to Zarate’s office Tuesday (January 30) while the lawmaker was at a congressional inquiry.

According to the subpoena, Zarate not being able to appear on the date it indicated would mean that he has waived the right to a preliminary investigation.

Zarate slammed the charges against him and other militant leaders, calling it “a calibrated harassment against members of the Left.”

He also hit the late serving of the subpoena to his office, which he said was “to ensure that [he] would not be able to attend and question these baseless and trumped-up cases.”

Ortega, who was deployed as part of the crowd disturbance management contingent, said he sustained wounds, cuts and bruises and even fainted as a result of the purported charging of protesters.

However, Zarate said it was protesters who beared most of the injuries during the demonstration.

“It can be remembered that it was the rallyists who were mostly injured when the police truncheoned and blasted them with water. The police even used their sonic weapon or their Long Range Acoustic Device against the rallyists injuring them and even bystanders,” he said.

Zarate said he and his co-accused will be facing the charges against them “knowing that [they] did nothing wrong; we’re just exercising our freedom of expression and right to assembly.”