ACT solons on pay hike for teachers: If there’s a will, there’s a way 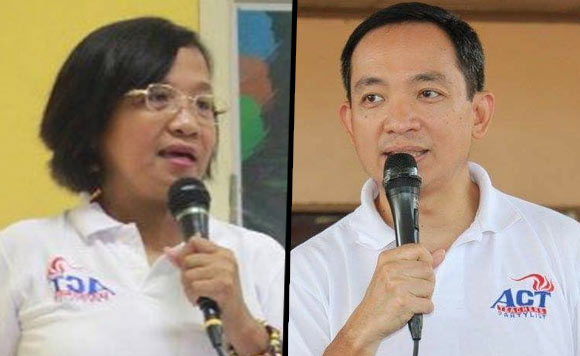 0 628
Share
Want more POLITIKO News? Get the latest newsfeed here. We publish dozens and dozens of politics-only news stories every hour. Click here to get to know more about your politiko - from trivial to crucial. it's our commitment to tell their stories. We follow your favorite POLITIKO like they are rockstars. If you are the politiko, always remember, your side is always our story. Read more. Find out more. Get the latest news here before it spreads on social media. Follow and bookmark this link. https://goo.gl/SvY8Kr

ACT Teachers partylist Representatives Antonio Tinio and France Castro criticized House committee on appropriations chairman Karlo Nograles for saying that salaries of public school teachers along with other government employees could only be raised after two years.

“It is ironic that Nograles boasts of the ‘technical studies’ that the committee is currently conducting on the matter when the Department of Budget and Management and the House Committee were able to present neither a single study nor any scientific basis when the unprecedented doubling of the basic pay of the military and uniformed personnel was enacted,” Tinio said.

“Rank-and-file government employees receive as low as P11,000 a month. It is unfortunate that he chooses to let our civilian personnel struggle with only meager salaries until 2020,” he said.

“We witnessed how this administration can swiftly pass a measure to improve the lives of soldiers and policemen. The rank-and-file government employees, especially public school teachers deserve nothing less,” Castro said.

The Makabayan lawmakers were reacting to Nograles’ statement that his committee would prioritize teachers’ salary hike after the release of the fourth round of wage hikes under the Salary Standardization Law.

Nograles said the latest tranche of salary adjustments for government employees including teachers would be completed next year “and by then, the government should already have enough funds for a new round of wage increases.”

But Tinio said, “With his statement, Nograles effectively denies immediate economic relief to the bulk of the government workforce. We challenge him to act on the pending bills proposing the increase and upgrading of teachers’ salaries which remained untackled in his committee for more than a year,” Tinio said.

“As the old saying goes, if there’s a will, there’s a way. Year in and year out, we have 500 to 600 billion of uncollected taxes, pork and war budget that can fund higher compensation for our teachers and other government employees,” said Castro.

““This is the opportune time for the much awaited fulfillment of Duterte’s campaign promise to raise the salaries of public school teachers,” she added.

“Like what they did for soldiers and policemen, DBM should promptly draft the proposal for the pay hike. DBM Sec. Diokno must act on it or resign. Similarly, we call on the leadership of the House and Senate to pass a joint resolution comparable to the uniformed personnel’s House Joint Resolution No. 18. We demand the immediate substantial increase of salaries of public school teachers and rank-and-file government employees,” the two said.