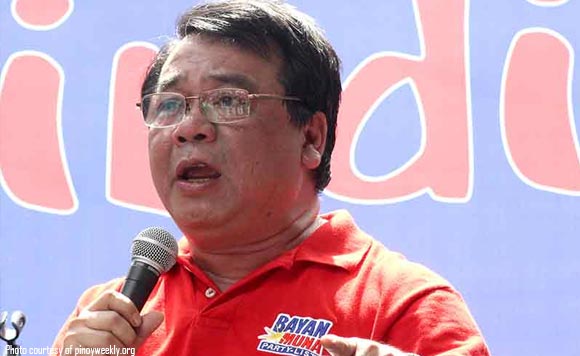 Former Bayan Muna Party-list Rep. Neri Colmenares warned of “constitutional crisis” should House Speaker Pantaleon Alvarez insist for Congress to convene as a constituent assembly even without the Senate.

“This is going to put the country on the road to a constitutional crisis just because [House] members want to convene a self-serving Con-ass to approve a self-serving [Charter change],” the politiko said.

The former progressive lawmaker said it would be “unconstitutional” and “absurd” for Congress to vote for amendments in the Constitution jointly while ordinary laws need separate approval of both chambers.

“It is not true that the Constitution expressly declared that Congress vote jointly. It does not. It is unconstitutional for the House to convene a Senateless Con-ass. It is absurd for Congress to insist that amendments to the Constitution can be voted jointly while ordinary laws need the approval of both houses voting separately,” he added.

He reminded Alvarez of the failed Resolution No. 1109 under Speaker Prospero Nograles in 2009, in which members of the House overwhelmingly approved the same Con-ass without the presence of senators.

“In the end, the move was defeated not by the Senate or the Courts but by the people including the various churches who showed outrage against such a self-serving act. The people must oppose this latest ramming of Cha-cha down our throats,” he said.