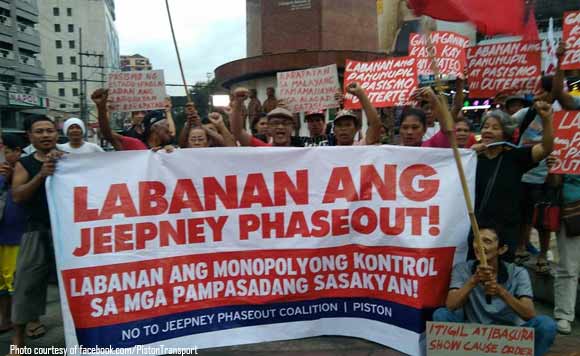 The battle on old jeepney replacement is not yet over.

Transport group Pinagkaisang Samahan ng mga Tsuper at Operator Nationwide (PISTON) announced Sunday that it would stage another nationwide protest this month against the government’s plan to phaseout old jeepneys.

“On January 24, we’ll hold protests at all offices of the Land Transportation Franchising and Regulatory Board in the entire country,” PISTON president George San Mateo said.

San Mateo clarified that the scheduled protest is not a strike meaning there will still be jeepneys plying metro streets.

The transport group made the announcement after the Department of Transportation said it will push through with the replacement of jeepneys which are at least 15 years old as part of the government’s public transportation modernization program.

PISTON earlier said that the program would greatly affect the livelihood of drivers and operators since they could not afford to buy the new e-jeepneys the government are proposing.

Aside from jeepney phaseout, San Mateo said their group will also ask the government to grant jeepney drivers a fuel discount of P6 per liter to cushion the impact of the Tax Reform for Acceleration and Inclusion (TRAIN) law, which took effect on January 1.

TRAIN raises the excise taxes on oil products such as diesel and gasoline.

San Mateo said jeepney operators will not ask for an increase in fares if the discount is granted.

Last December, San Mateo was arrested for leading a transport strike in February 2017 but was immediately released after posting bail of P4,000.