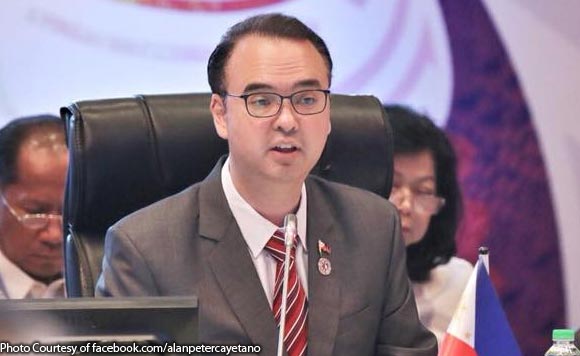 0 553
Share
Want more POLITIKO News? Get the latest newsfeed here. We publish dozens and dozens of politics-only news stories every hour. Click here to get to know more about your politiko - from trivial to crucial. it's our commitment to tell their stories. We follow your favorite POLITIKO like they are rockstars. If you are the politiko, always remember, your side is always our story. Read more. Find out more. Get the latest news here before it spreads on social media. Follow and bookmark this link. https://goo.gl/SvY8Kr

Department of Foreign Affairs (DFA) Secretary Alan Peter Cayetano said Friday a fact-finding committee has been formed to look into the monument honoring Philippine “comfort women” during World War II, and whether the installation of the statue underwent proper processes.

“Pag (If it is) public property or open spaces, there are a lot of requirements from the National Historical Institute, from the DPWH (Department of Public Works and Highways), from the city. So one thing we are looking at is the process,” he said.

Cayetano declined to give details on diplomatic discussions about the issue but said they provided two main considerations — the interest of the Filipino people and the maintenance of good relations with partners.

He said despite times when the Filipino interest “diverges” in the interest of good relations with other states, the country still “has to deal with the feelings of the people”.

“That’s the context of the DFA’s comments, pero wala pang final yung inter-agency. I think they are still in the stage of fact-finding — who put it up, why did they put it up, where do they put it up, who got the permits,” Cayetano said, adding that the department was not consulted on its construction.

“I believe (that in) anything that affects international relationships, there should have been consultations,” he added.

The “Comfort Woman” statue was unveiled in Manila last December.

In a letter dated Dec. 12, the DFA’s Office of Asia and Pacific Affairs asked the city government of Manila for information regarding the circumstances that led to the erection of the monument.

The Manila City government replied days later, saying that the Tulay Foundation Inc. had sought their “support and technical assistance on how and where to put up” the statue.

The marker on the monument says it was installed “in memory of Filipinas who were abused during the time of Japanese occupation in World War II”. (PNA)