Tinio on teachers’ pay hike: We welcome that but… 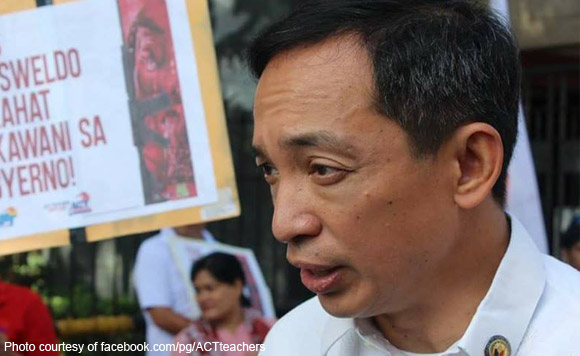 0 649
Share
Want more POLITIKO News? Get the latest newsfeed here. We publish dozens and dozens of politics-only news stories every hour. Click here to get to know more about your politiko - from trivial to crucial. it's our commitment to tell their stories. We follow your favorite POLITIKO like they are rockstars. If you are the politiko, always remember, your side is always our story. Read more. Find out more. Get the latest news here before it spreads on social media. Follow and bookmark this link. https://goo.gl/SvY8Kr

“His administration has already set the benchmark by doubling the basic pay of uniformed personnel starting this year. Our teachers deserve nothing less. We eagerly await the formal proposal from the DBM (Department of Budget and Management),” the Makabayan lawmaker said.

But Tinio’s enthusiasm about the news came with some reservations.

“This is a blatant PR tactic intended to make the new tax package, the centerpiece of which is the lowering of corporate income tax, more palatable to the public. Don’t use teachers to deodorize your pro-rich taxes!” he said.

“We will not relent in our advocacy for decent salaries for teachers and all other government employees even as we continue our struggle against the anti-poor tax reform agenda of the Duterte administration,” he added.

Tinio acknowledged that the President’s commitment to raising teachers’ salaries was an important step.

“The President’s pronouncement is especially significant, given the statements to the contrary made by key officials of his Cabinet. DBM Secretary Ben Diokno has said that raising teachers’ salaries is ‘too ambitious,’ while Department of Education Secretary Leonor Briones says that public school teachers are already well-compensated and they should focus on acquiring ‘financial literacy’,” he said.

“All of these should now be set aside,” Tinio said.

“We reiterate our demand that the salaries of all government employees should be increased. The minimum monthly pay should be raised to not less than P16,000,” he said.