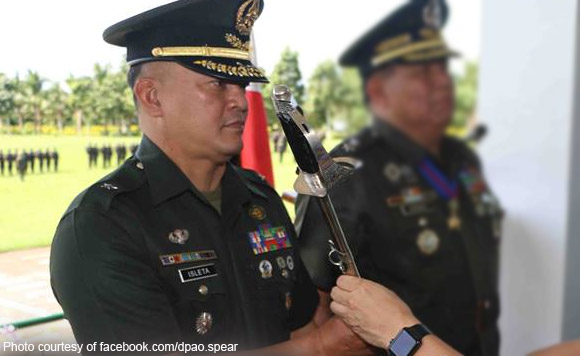 0 1,277
Share
Want more POLITIKO News? Get the latest newsfeed here. We publish dozens and dozens of politics-only news stories every hour. Click here to get to know more about your politiko - from trivial to crucial. it's our commitment to tell their stories. We follow your favorite POLITIKO like they are rockstars. If you are the politiko, always remember, your side is always our story. Read more. Find out more. Get the latest news here before it spreads on social media. Follow and bookmark this link. https://goo.gl/SvY8Kr

He replaced Major Gen. Gilbert I. Gapay, who was appointed head of the Tarlac-based Mechanized Infantry Division.

Isleta is a member of the Philippine Military Academy (PMA) Class of 1985, and holds a Master’s degree in Public Administration.

Prior to his appointment, he was the deputy commander and acting commanding general of the Bicol-based 9th Infantry Division, and head of the Office of Gender and Development of the said unit.

Gapay is a member of PMA Class of 1986, who served as deputy commander of the Eastern Mindanao Command and head of Joint Task Force Harribon that secured Davao City and the rest of Davao Region, and spokesperson for the Martial Law implementation in Mindanao. (PNA)