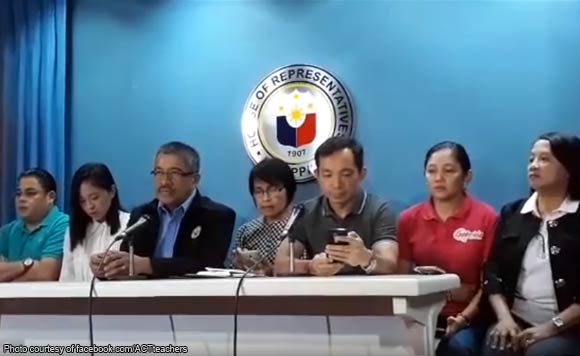 The Makabayan bloc of partylist lawmakers branded as “absurd” what it called the “malicious insination” of House Speaker Pantaleon Alvarez that its members are benefiting from revolutionary taxes imposed by the New People’s Army.

“The malicious insinuation that the Makabayan bloc is receiving or in any way benefiting from NPA revolutionary taxation is too absurd for further comment, were it not for the real danger that he could be laying a preposterous predicate for cracking down on Makabayan on trumped up charges,” the group said in a statement.

“We in the Makabayan bloc, detest the malicious and dangerous red tagging by Speaker Pantaleon Alvarez. It is clear that the House leadership just wants to divert attention from the now awakened issue of thriving pork barrel in Congress,” they said.

“This crude attempt to implicate the Makabayan bloc in the collection of revolutionary taxes is, if anything, only a means to further strengthen the administration’s objective to incriminate all of its ‘dissenters’ as either terrorists or terrorist financiers,” Makabayan said.

“Speaker Alvarez should just stick to the issue of pork barrel at hand and not try to use a smokescreen or flagrantly justify the continued proliferation of patronage politics,” they added.

Alvarez issued a statement on Thursday, stating that, “In the first place, the so-called Makabayan bloc consisting of party-list groups identified with the mainstream Left has not accessed funds from Congress at all.”

“We do not know where they get funds for projects for their constituents,” Alvarez said.

“All we know is that the communist rebels with whom they have an ideological and political affinity impose what’s known as revolutionary taxation in areas where they operate,” he said.

He issued the statement following reports identifying the seven Makabayan members as among the 24 who got zero funding for infrastructure in the 2018 budget.

The Makabayan is composed of Carlos Zarate of Bayan Muna, Antonio Tinio and France Castro of ACT Teachers, Emmi de Jesus and Arlene Brosas of Gabriela, Ariel Casilao of Anakpawis, and Sarah Elago of Kabataan.