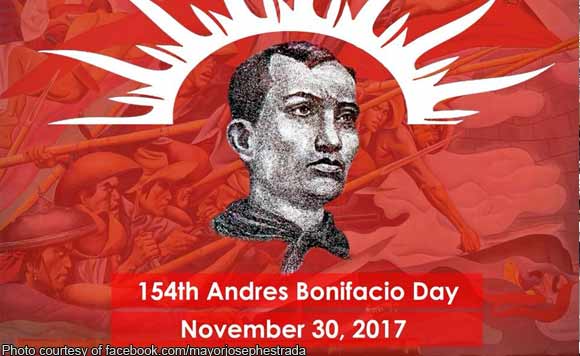 The relatives of Andres Bonifacio, the Father of Philippine Revolution and his wife, Gregoria de Jesus urged Filipinos to unite and stop bickering for the nation to be prosperous.

At the sidelines of the flag-raising and wreath-laying ceremony at the Bonifacio Shrine in Taft Avenue, Manila in commemoration of the hero’s 154th birth anniversary on Thursday, Dominic Faustino, a relative of De Jesus and Susan Eslabon Distrito, a relative of Bonifacio urged Filipinos to act as one for the good of the nation.

He was referring to the speech of Manila City Administrator Erickson Alcovendaz, who read the message of Mayor Joseph Estrada, who was not able to join the event due to health reasons.

The local government official noted that commemorating the birth anniversary of the ‘Great Plebeian’ is the best time or opportunity for the people to work as one nation.

“Probably, the best time to look back at history and remember its lessons in order for us to unite as one nation,” he added.

Aside from the event in Manila, ceremonial activities were simultaneously held in Caloocan City at the Bonifacio National Monument; Bonifacio monuments in Cloverleaf, Balintawak, Quezon City and Tutuban, Manila, respectively to commemorate the hero’s birthday. (PNA)