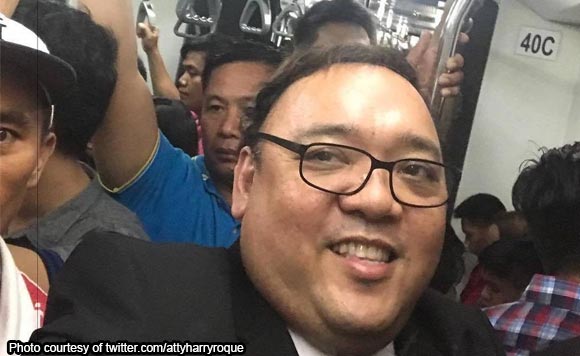 0 657
Share
Want more POLITIKO News? Get the latest newsfeed here. We publish dozens and dozens of politics-only news stories every hour. Click here to get to know more about your politiko - from trivial to crucial. it's our commitment to tell their stories. We follow your favorite POLITIKO like they are rockstars. If you are the politiko, always remember, your side is always our story. Read more. Find out more. Get the latest news here before it spreads on social media. Follow and bookmark this link. https://goo.gl/SvY8Kr

Let the expert coach the newbie.

Although claiming that he wanted to experience the life of the average commuter, Roque came with a media entourage and security detail who cleared the line for him to the rail.

The VIP treatment won him bashers on social media.

Roque has been on the train before, but he didn’t get the same special assistance as he did now.

On the other side of the fence is Muntinlupa Rep. Ruffy Biazon, who has mastered the art of taking the Metro Rail Transit (MRT) from home to Batasan.

Unlike Roque, Biazon has been through it all — from skip trains to offloaded passengers and neck-to-neck personal space, you name it.

It's stressful when you're late due to traffic on Edsa and decide to take the rail with only a hope that it won't break down and make you more late. pic.twitter.com/VDmMIC5pIl

We got offloaded at Shaw boulevard station, with the train declared "for removal". pic.twitter.com/bwjv46pzzd

That feeling when you're on the train but all the vehicles out there are moving past you. pic.twitter.com/xvg02QdfEJ

Who’s a better judge of the train system?