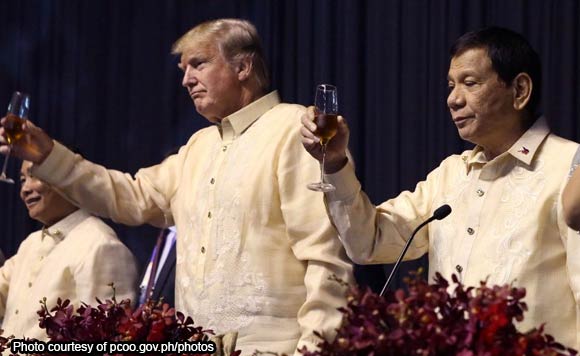 The Philippines and the United States affirmed their strong ties at the 31st ASEAN Summit, just over a year after President Rodrigo Duterte announced he cut ties with Washington at another international summit.

“Both leaders affirmed the close PH-US ties with the US leader telling the President that he has always been a friend of the Duterte administration,” said Secretary Harry Roque of the first formal meeting between US President Donald Trump and Duterte.

Unlike former US President Barack Obama, Trump is supportive of Duterte’s drug war, and even told the Philippine president that he sympathizes with the country over its drug problem.

Also unlike Obama, Trump is yet to be called by Duterte a son of a bitch

The affirmation of US-Philippine ties during a “warm and cordial” meeting is a stark contrast to the expletive-laden speech delivered by Duterte at the Philippines-China Trade and Investment Forum just over a year ago.

There, Duterte announced that he was cutting military, social and economic ties with longtime trading partner Washington in favor of China.

However, Duterte had been cozying up to the United States ever since Trump was catapulted from reality television to the White House in a shock victory last year.