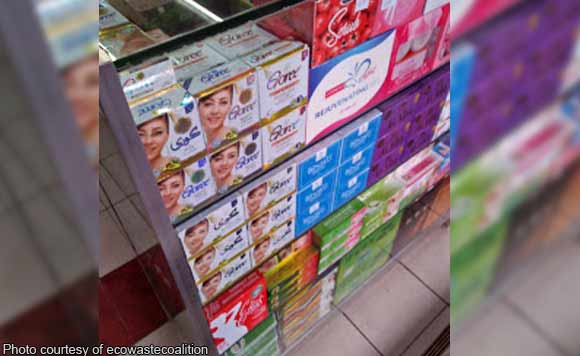 With one week to go before the Association of Southeast Asian Nations summit, an ecological group called for an end to the sale of skin-whitening cosmetics containing mercury in the region.

The EcoWaste Coalition said exposure to mercury in cosmetics can cause damage to the brain, the central nervous system, and the kidneys.

According to the group, the Philippines cannot stop by itself the smuggling of mercury-loaded cosmetics into its porous borders.

“It has to address the problem through bilateral and multilateral initiatives within and outside the Asean framework to put an end to the unlawful trade,” it said.

Region-wide actions may include strengthening the product alert program of the Asean Committee on Consumer Protection to guide consumers, businessmen and government regulators, including customs inspectors, on banned and recalled goods.

The call stemmed from the group’s finding that such products are still being sold in Manila and Pasay Cities, costing P60 to P280 each while containing mercury above the maximum allowable limit of one part per million (ppm) under the Asean Cosmetics Directive.

Worse, some of the products had already been banned by the Food and Drug Administration.

Aside from the Philippines, other Asean members such as Brunei, Cambodia, Indonesia, Malaysia, Myanmar, Singapore and Thailand have banned or recalled skin whitening cosmetics due to their high mercury content.