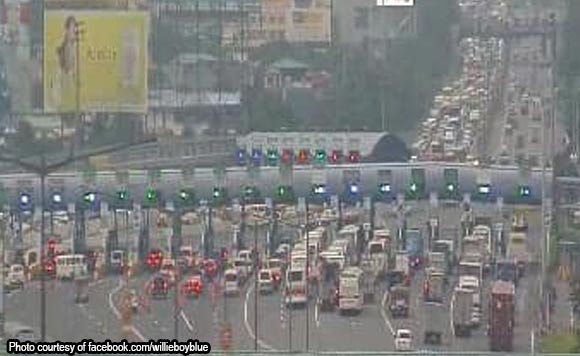 0 766
Share
Want more POLITIKO News? Get the latest newsfeed here. We publish dozens and dozens of politics-only news stories every hour. Click here to get to know more about your politiko - from trivial to crucial. it's our commitment to tell their stories. We follow your favorite POLITIKO like they are rockstars. If you are the politiko, always remember, your side is always our story. Read more. Find out more. Get the latest news here before it spreads on social media. Follow and bookmark this link. https://goo.gl/SvY8Kr

No trucks and closed vans will be allowed to pass through Subic–Clark–Tarlac Expressway (SCTEX) and North Luzon Expressway (NLEX) southbound lane from November 12 to 15 for the ASEAN Summit.

The ASEAN Committee on Security, Peace and Order, and Emergency Preparedness and Response (CSPOEPR) made this announcement Saturday saying that the truck ban will be imposed to ensure smooth flow of traffic from Clark to Balintawak.

The truck ban will also be implemented from Balintawak to Magallanes during the same period.

Interior and Local Government officer in charge Catalino Cuy said motorists should expect intermittent traffic stops in designated ASEAN lanes in Makati area such as along Arnaiz Avenue, Makati Avenue, Parkway Drive, along Edsa in the Makati area from Nov. 11-15.

During the same period, rerouting will also be implemented along Sen. Jose W. Diokno Boulevard, Jalandoni, V. Sotto, Bukaneg, and A. Dela Rama in Pasay City.

Cuy said the whole CCP Complex will be closed for the same dates as it has been designated as area exclusively for ASEAN delegates.

“We urge the public to veer away from the said areas and take alternate routes to avoid being inconvenienced by the heavy traffic while the ASEAN Summit is ongoing,” he said.