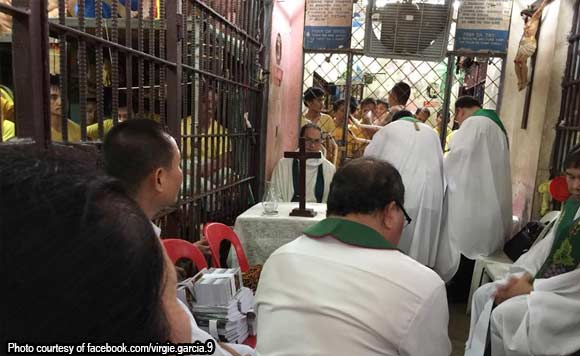 Caloocan Bishop Pablo David gathered the families of those who died in the administration’s bloody drug war at San Roque Cathedral in Caloocan City on Tuesday night to start a novena leading to All Souls’ Day.

Around 50 families of those who were killed in police operations and vigilante-style killings attended the novena and again cried justice for their loved ones.

“We light candles for them to declare that (these killings are) not right. That this is inhumane and must be stopped. Even animals are not this cruel,” David said in his message.

He said while prayers are needed for the repose of the souls of drug war victims, the “living dead” or those who killed them must be prayed more times over.

“If we pray for Reynaldo de Guzman, we also pray for whoever stabbed him 33 times,” he said, referring to the teenager who was allegedly killed together with Carl Angelo Arnaiz.

“We also pray for the souls of the police who shot Kian delos Santos even though he begged that he had an exam,” he added.

“As we pray and light these candles for them, may it scorch and rouse their numbed souls. May the sound of chicks pecking at the glass of the caskets of those they killed stay etched in their minds, and may they never find quiet amid the grief of the spouses and children of their victims,” the Bishop said.