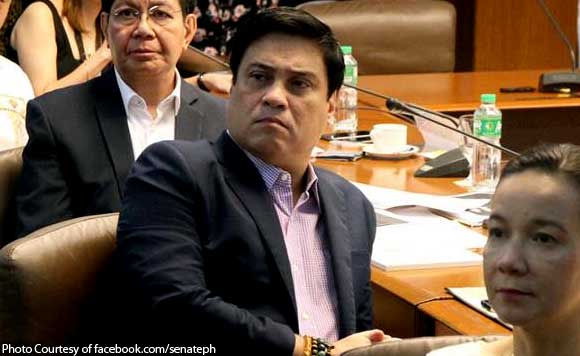 Senator Juan Miguel Zubiri is not buying the claims of John Paul Solano that UST law student Horacio “Atio” Castillo III died of a pre-existing heart condition and not due to injuries he sustained during hazing rites.

“Regardless of any pre-condition of which the parents completely deny, it’s obvious that they are just trying to find excuses for Atio’s murder,” the politiko said.

“So how can they explain the discoloration of the body due to massive hematoma? How can they dispute the medico-legal finding of DNA of Atio on the paddle used by the Aegis Juris frat men of which is illegal to use under the anti-hazing Law?” he asked.

Zubiri chided Solano for showing a “massive disrespect” for Castillo and his family.

“Their alibi clearly shows a massive disrespect for Atio, his family and the Filipino people. Does he even have proof of his statement being that Atio is an athlete football player of Colegio San Agustin,” Zubiri said.

“Clearly, Solano is lying through his teeth, covering up for his frat brods like a criminal syndicate member and he should be punished as well for conspiracy, obstruction of justice, and perjury for the Death of Atio Castillo,” he added.

In his counter-affidavit filed Tuesday, Solano said Castillo died due to his pre-existing hypertrophic cardiomyopathy (HCM).

This was denied by Castillo’s parents with Carmina saying that his son was a “very active” person and he was even a football player.

Horacio insisted that his son died of heart attack due to massive trauma resulting from the brutal initiation rites.

Solano is one of the 18 Aegis Juris fraternity members facing charges of robbery, perjury, anti-hazing law violation, and obstruction of justice over Castillo’s death.