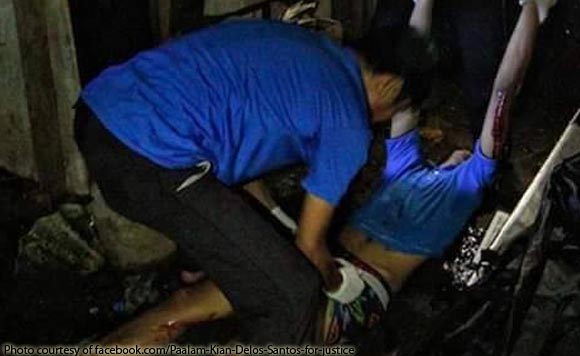 Twelve policemen, who were added in the criminal complaints for the slay of student Kian delos Santos in Caloocan City on August 16, submitted on Monday their counter affidavits during the continuation of preliminary investigation at the Department of Justice (DOJ).

“They were not present so apparently they shouldn’t be included in the case because they don’t have any participation. Some were on sick leave while some were assigned in other cases,” their lawyer Oliver Yuan said after the hearing.

They denied the charges filed against them by Kian’s parents Saldy and Lorenza by Public Attorney’s Office (PAO) for murder under Article 248 of the Revised Penal Code (RPC); violation of domicile under Article 128 of the RPC; torturing a minor resulting to death in violation of Republic Act 9745, also known as the Anti-Torture Law; and planting of evidence under Section 29 of Republic Act 9165, the Comprehensive Dangerous Drugs Act of 2002.

The 12 policemen submitted two sets of counter-affidavits asking the panel of prosecutors to exclude them from the slay case of delos Santos.

“The first joint counter-affidavit involves the eight police officers who did not actually participate in the conduct of Oplan Galugad on August 16, 2017,” said Yuan.

“Some were on sick leave, some were assigned in other cases,” the lawyer added.

During Monday’s hearing, only Herrera was absent because he had to attend a court hearing in Caloocan City.

In their amended complaint, Saldy and Lorenza Delos Santos asked the DOJ to indict the additional respondents in court.

The four policemen also denied criminal liability in earlier answer, claiming that they killed Kian after the student shot at them.

Senior Assistant State Prosecutor Ma. Emilia Victorio, who heads the panel of prosecutors handling the case, said Herrera has waived his right in filing the counter-affidavit.

Victorio gave the PAO which represent the parents of delos Santos to file its reply to all of the counter-affidavits on October 25.

Meanwhile, the respondents were allowed to file their rejoinders on October 27, after which the case is considered submitted for resolution. (PNA)