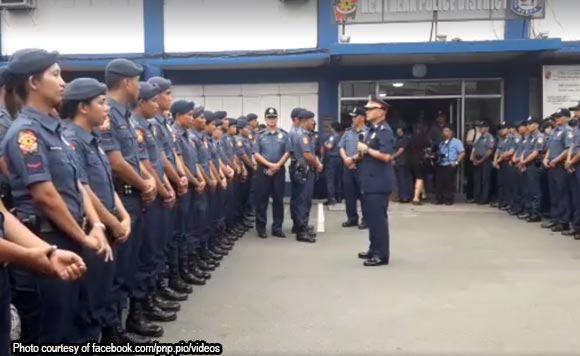 0 554
Share
Want more POLITIKO News? Get the latest newsfeed here. We publish dozens and dozens of politics-only news stories every hour. Click here to get to know more about your politiko - from trivial to crucial. it's our commitment to tell their stories. We follow your favorite POLITIKO like they are rockstars. If you are the politiko, always remember, your side is always our story. Read more. Find out more. Get the latest news here before it spreads on social media. Follow and bookmark this link. https://goo.gl/SvY8Kr

After getting heavy flak for series of killings of minors, newly appointed Caloocan police chief Senior Supt. Jemar Modequillo has opted to take a softer approach in maintaining peace and order in the city.

But instead of throwing them all in jail for violating several city ordinances, the violators were punished by doing push-ups, squats and sit-ups.

Male offenders were told to do push-ups and sit-ups, while the women were asked to do squats. They were then all released after a serious warning.

Modequillo, who is known to use push-ups as punishment for public offenders during his stint as Las Piñas police chief, said he would want to instill discipline among Caloocal citizens.

He said he believed punishing offenders with physical exercise was a “forceful and efficient” reminder for them to become responsible and law-abiding people.