Check out Ruffy Biazon’s experience as commuter for a day 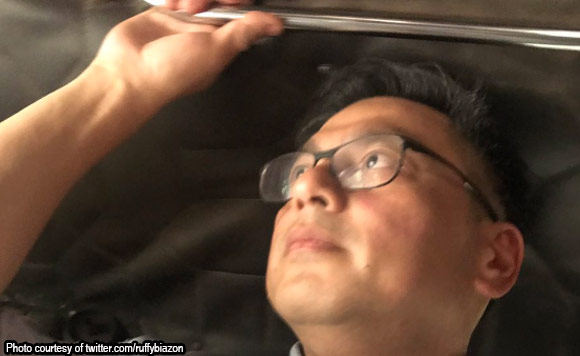 His little joyride showed him not-so-walkable sidewalks and cramped modes of travel.

Muntinlupa Congressman Ruffy Biazon went incognito for a day as he decided to take a leisurely commute around Metro Manila. While he is known to take the Metro Rail Transit from time to time, taking the bus and jeep is a rare occurrence.

The politiko decided to walk the streets of Manila, and boy was he surprised about how inconvenient things are for Filipinos. He got to see sidewalks with almost no space to walk on and the occasional shady alleys.

While walking along Pedro Gil going to Taft Ave, I chanced upon this obstruction on the sidewalk. pic.twitter.com/W8UBiqqnio

Walking along Taft, this luggage display was occupying a significant amount of sidewalk. pic.twitter.com/09gBJswEyd

He also took the jeepney and the bus, which he found to be cramped for a big guy like him.

Not many passengers but not much leg room in this bus for big guys like me. pic.twitter.com/p8HH1Z8a2N

Will this lead him to make big gains for public transport? Abangan!

Galante! Karina Teh to raffle off TV, phones, cash for…

Gian Sotto’s family opts for general cleaning at home after…