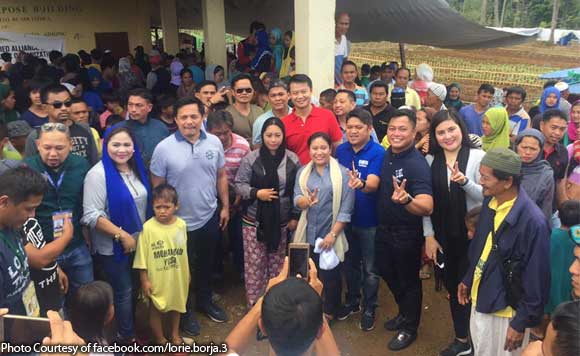 0 551
Share
Want more POLITIKO News? Get the latest newsfeed here. We publish dozens and dozens of politics-only news stories every hour. Click here to get to know more about your politiko - from trivial to crucial. it's our commitment to tell their stories. We follow your favorite POLITIKO like they are rockstars. If you are the politiko, always remember, your side is always our story. Read more. Find out more. Get the latest news here before it spreads on social media. Follow and bookmark this link. https://goo.gl/SvY8Kr

Her service extends beyond city borders.

Marawi City may be thousands of miles away from Valenzuela, but politikos there still felt the need to help out those displaced by the war.

Vice Mayor Lorie Borja led a team of politikos from Valenzuela to the tent cities in Lanao del Norte where families displaced by the firefight have been staying.

The team handed out relief packs and gave words of encouragement to the survivors. With them was Senator Sherwin Gatchalian, a former Valenzuela mayor.

Our 2nd trip to Marawi brings into the city 3m worth of goods contributed by the great people of Valenzuela…Valenzuela Cares! pic.twitter.com/JULENB0VAP

Evacuees from Marawi who are staying at the Tent City of Pantar, Lanao del Norte receive relief goods from Valenzuela City. #VCCares pic.twitter.com/fs9h1pGezu