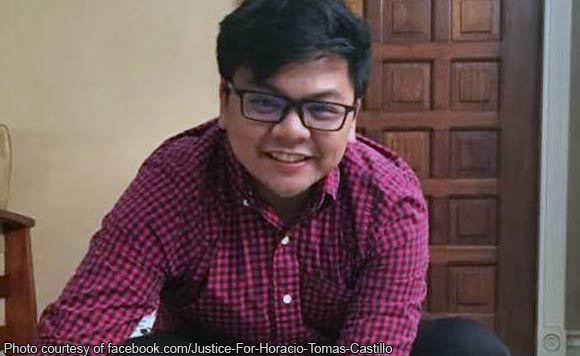 0 432
Share
Want more POLITIKO News? Get the latest newsfeed here. We publish dozens and dozens of politics-only news stories every hour. Click here to get to know more about your politiko - from trivial to crucial. it's our commitment to tell their stories. We follow your favorite POLITIKO like they are rockstars. If you are the politiko, always remember, your side is always our story. Read more. Find out more. Get the latest news here before it spreads on social media. Follow and bookmark this link. https://goo.gl/SvY8Kr

This was after the Manila Police District (MPD) on Monday filed murder, obstruction of justice, perjury, robbery and violation of the Anti-Hazing Law charges against 18 people, including John Paul Solano.

Solano, who is considered as the primary suspect in the case, is currently under police custody after surrendering last week to Senator Panfilo Lacson.

Antonio, father of Ralph, is allegedly the owner of the vehicle used to transport the body of Castillo to the hospital.

Ralph and his mother Rosemarie flew to the United States last September 19, few days before the alleged hazing rites of Castillo happened.

Authorities earlier said that the Trangia couple might face obstruction of justice charges for their involvement in Castillo’s death.

Other respondents in the case remain at large, according to police.