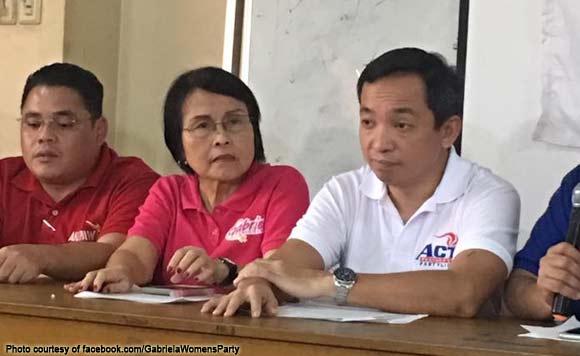 Gabriela Women’s Party believed that the overwhelming public sentiment has forced the House of Representatives to restore the budget of the Commission on Human Rights (CHR).

Rep. Emmi De Jesus said the House was just scared of “public backlash” which compelled them to restore the CHR budget from P1,000 to its original P678 million funding.

“It forms part of the various attempts of the Duterte administration to pour cold water on the massive anti-tyranny protest set today, the 45th year of the martial law declaration of the fraternity Marcos regime,” she said in a statement.

Akbayan party-list Rep. Tom Villarin echoed the view of Gabriela saying that the “strong public clamor” has forced the House to backtrack.

“The will of the people made them backtrack. Using the budget as a political weapon against those critical of the administration or to demand submission by heads of agencies to Congress will create gridlocks and will not work for the interest of the people,” he said.

Magdalo party-list Rep. Gary Alejano also believed that the House chickened out due to pressure.

“Members of the House received numerous inquiries from the media and their constituents on their votes and the explanation of such vote. Most of the senators have also expressed their support in upholding the CHR’s budget,” he said.

“Certainly, these pressures have reached the doorsteps of the leaders of the House. In the end, the voice of the people prevailed. The people’s representatives heard them and acted accordingly,” he added.

House appropriations committee head Karlo Nograles on Wednesday confirmed the restoration of the budget of CHR as well as the Energy Regulatory Commission and the National Commission on Indigenous Peoples following reports that the heads of the three agencies personally made an appeal to Speaker Pantaleon Alvarez.