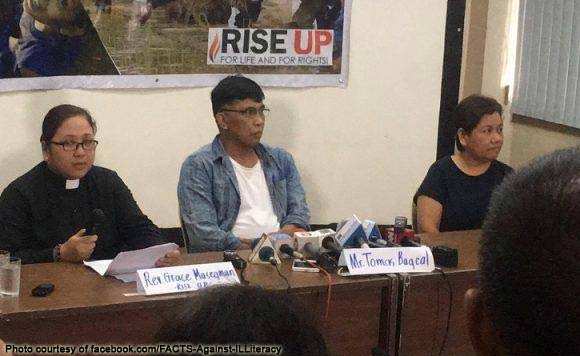 A rights group won’t give up easily taxi driver Tomas Bagcal as it intends to use him to condemn the drug war of President Rodrigo Duterte.

Rise Up for Life and for Rights convenor Grace Masegman said it intends to present Bagcal before the Senate which is conducting an inquiry over the death of 19-year-old University of the Philippines (UP) student Carl Angelo Arnaiz.

“We denounce Duterte’s ‘war on drugs:’ the streets run with the blood of our children and the lives of many families are being devastated by this state policy,” said Masegman in a statement.

Earlier, Justice Secretary Vitaliano Aguirre called on the group to allow the National Bureau of Investigation (NBI) to interview Bagcal over the killing of Arnaiz.

Masegman said her group took in Bagcal as the driver expressed for his life and that of his family.

“We commend Tomas Bagcal for coming forward to testify as to what really transpired,” Masegman said.

Bagcal claimed he was indeed robbed by Arnaiz whom he managed to catch with the help of bystanders who beat up the student.

“He turned over the suspect hold-upper alive, though beaten up by bystanders, to the police. There was no firefight; no such thing as ‘nanlabang suspect’,” said Masegman.