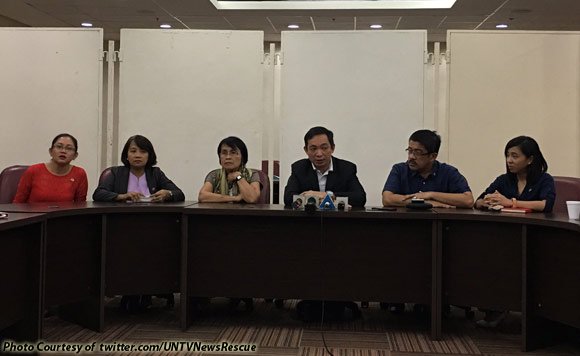 Makabayan partylist lawmakers filed House Resolution No. 1265 urging the House of Representatives to investigate the August. 30 incident that led to the violent dispersal of residents protesting the demolition of their houses along the banks of the Manggahan Floodway in Barangay Sta. Lucia, Pasig City.

The resolution was filed by Carlos Zarate of Bayan Muna, Emmi de Jesus and Arlene Brosas of Gabriela, Antonio Tinio and France Castro of ACT-TEACHERS, Ariel Casilao of Anakpawis and Sarah Elago of Kabataan.

The leftist lawmakers said that on August 30, at around 1:00 p.m., elements of the Eastern Police District (EPD) violently dispersed residents of Balikwas-Kadamay who were seeking a dialogue with Pasig Mayor Robert Eusebio in Barangay Manggahan to air their opposition against the planned demolition of their houses along.

“Instead of conducting a dialogue, police were sent to the area and dispersed the residents who have barricaded the East Bank Road in the said barangay,” they said.

At least 30 people were hurt during the dispersal, while the police arrested 41 members of urban poor group Kadamay, including 14 women and 10 minors, who were charged with illegal assembly and direct assault, Makabayan said.

They also cited the claim of human rights group Karapatan that the EPD went around the area in Barangay Sta Lucia to look for Kadamay members as part of “clearing operations.”