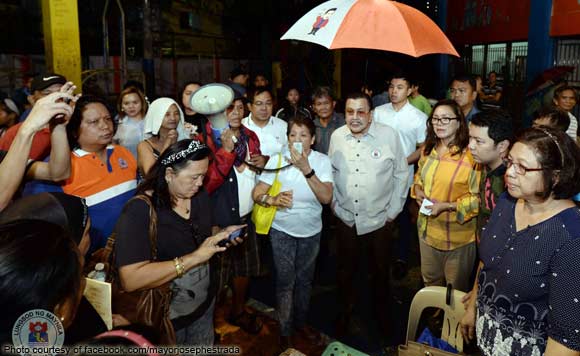 0 613
Share
Want more POLITIKO News? Get the latest newsfeed here. We publish dozens and dozens of politics-only news stories every hour. Click here to get to know more about your politiko - from trivial to crucial. it's our commitment to tell their stories. We follow your favorite POLITIKO like they are rockstars. If you are the politiko, always remember, your side is always our story. Read more. Find out more. Get the latest news here before it spreads on social media. Follow and bookmark this link. https://goo.gl/SvY8Kr

Manila Mayor Joseph “Erap” Estrada has promised to help at least 2,000 families recover from the successive fires that hit at least five residential areas and left four dead in the capital city since last week.

Estrada visited last Saturday Barangay 704, Zone 77 in Adriatico, Malate, the scene of a huge fire the day before that left two residents dead and dozens of houses destroyed.

“It’s tragic that two Manilenos perished here, and two more in Tondo. I grieve with the families. But rest assured that help is underway,” Estrada told barangay officials and some of the displaced residents.

Estarada has directed the Manila Department of Social Welfare (MDSW) to continue providing homeless residents basic necessities such as food and temporary shelter.

The city hall would also study other assistance for those who lost their loved ones.

Estrada also made sure that the barangay hall’s covered court is ready to temporarily accommodate homeless residents.

The Adriatico fire on August 18, Friday, gutted 250 homes along Camia Street and destroyed an estimated P2.7 million worth of properties. Unfortunately, it also resulted to the deaths of two residents identified as Abelardo Salonga, 79, and his son Jimmy, 47; 380 families were displaced.

It said 453 families or 1,829 individuals remain housed at three evacuation centers in barangays 101, 105, and 106. It identified the two fatalities as Lina Ambulinog and Analyn Ambulinog.

Two days prior, on August 16, a fire also razed a small community along Sikap Street, Barangay 64, Zone 47 in San Miguel district, near Malacanang. At least 250 families were affected and about 100 shanties were razed to the ground.

On August 14, 10 more houses in Barangay 95, Zone 8 in Tondo were destroyed in yet another fire that left 30 families homeless. Ten days before, on August 4, another blaze gutted 12 houses along Singalong Street, Malate.

More or less 2,000 families were displaced by the consecutive fires, according to MDSW chief Nanet Tanyag.