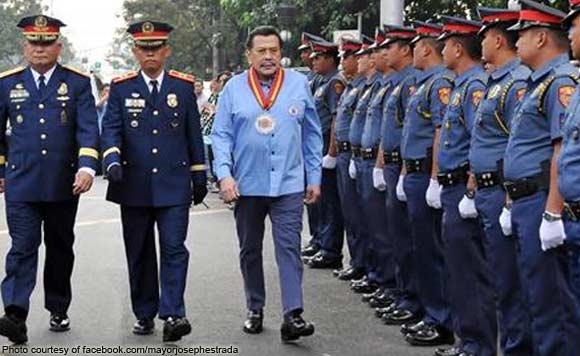 0 704
Share
Want more POLITIKO News? Get the latest newsfeed here. We publish dozens and dozens of politics-only news stories every hour. Click here to get to know more about your politiko - from trivial to crucial. it's our commitment to tell their stories. We follow your favorite POLITIKO like they are rockstars. If you are the politiko, always remember, your side is always our story. Read more. Find out more. Get the latest news here before it spreads on social media. Follow and bookmark this link. https://goo.gl/SvY8Kr

The 4,600-strong MPD was also cited by the National Capital Regional Police Office (NCRPO) for having the highest accomplishment in “Project Double Barrel” and also for registering the highest index crime solution efficiency, as well as having the most number of confiscated firearms for 2016-2017.

“You’ve been called ‘Manila’s Finest’ because you exemplify the highest standards of police service: honesty, integrity, and competency. Keep up the good work,” Estrada said in his message to MPD director Chief Supt. Joel Coronel and his men.

Estrada pointed out that the MPD’s hard work and sacrifices have resulted to decreased crime rate in the city and neutralization of hundreds of big-time drug traffickers that have pestered the nation’s capital for long years.

“On behalf of the 1.7 million Manilenos, I thank you for protecting the City of Manila. We enjoy continuous economic progress because of the improving peace and order that you pay for with your own lives,” he added.