Erap to criminals: Surrender or face full force of law 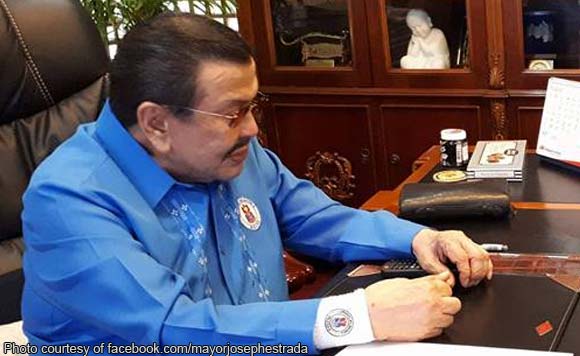 0 667
Share
Want more POLITIKO News? Get the latest newsfeed here. We publish dozens and dozens of politics-only news stories every hour. Click here to get to know more about your politiko - from trivial to crucial. it's our commitment to tell their stories. We follow your favorite POLITIKO like they are rockstars. If you are the politiko, always remember, your side is always our story. Read more. Find out more. Get the latest news here before it spreads on social media. Follow and bookmark this link. https://goo.gl/SvY8Kr

Manila Mayor Joseph “Erap” Estrada on Thursday renewed his warning to criminals to turn over a new leaf or else face a sustained anti-criminality campaign of the Manila Police District (MPD).

Estrada made this statement after an overnight operation of the MPD that has so far resulted to the deaths of 25 crime suspects- the biggest number of suspects killed by police in a single day in the city.

“In support of President Duterte’s war against drugs and criminality, we in the City of Manila have been serious in stamping out criminality and maintaining peace and order and so I’m repeating my warning to criminals: give up or face the full force of the law.”

Estrada commended MPD director Chief Supt. Joel Coronel and his men for their zealousness in ridding Manila of unwanted criminals and preserving peace and order; he also reassured the city police force of the city government’s continuous support.

“I have your back,” he told Colonel, “just assure that this operation is carried out within the parameters of the law and the suspects’ rights are not violated.”

This afternoon, Estrada received a briefing from Coronel concerning the “one-time, big-time” operation that started Wednesday night and is still ongoing as of this time.

In an interview, Coronel said that as of 8 am today, 25 suspects have been killed when they fought it out with the lawmen while 166 others have been arrested.

Of the 166, 48 were arrested for various criminal offenses while the rest, 118, were detained for violations of different city ordinances. The simultaneous anti-criminality operations were carried out in Sta. Cruz, Sampaloc, Malate, Tondo, and Abad Santos Avenue, among others, Coronel added.