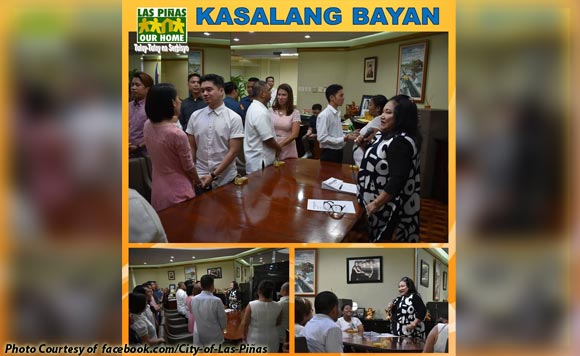 0 769
Share
Want more POLITIKO News? Get the latest newsfeed here. We publish dozens and dozens of politics-only news stories every hour. Click here to get to know more about your politiko - from trivial to crucial. it's our commitment to tell their stories. We follow your favorite POLITIKO like they are rockstars. If you are the politiko, always remember, your side is always our story. Read more. Find out more. Get the latest news here before it spreads on social media. Follow and bookmark this link. https://goo.gl/SvY8Kr

Ten couples from Las Pinas City were wed on Tuesday, August 8, in civil ceremonies officiated by Mayor Mel Aguilar held at her office.

She said the public wedding provided opportunities for couples to legalize their union and presented the means for the legitimization of children born out of wedlock.

The couples are given free rings. Free snacks are also provided to the newlyweds and the members of their entourage.

Kasalang Bayan usually happens twice a month at the City Hall. Couples who want to join the mass wedding are advised to apply for marriage license first at the Office of the Civil Registry.

Couples must submit birth certificates, Certificate of No Marriage Record and certificate of legal capacity to contract marriage (for those marrying foreigner).

They must also attend the planning seminar officiated by the City Social Work and Development Office and the City Health Office This is a requirement in order to get the marriage license.