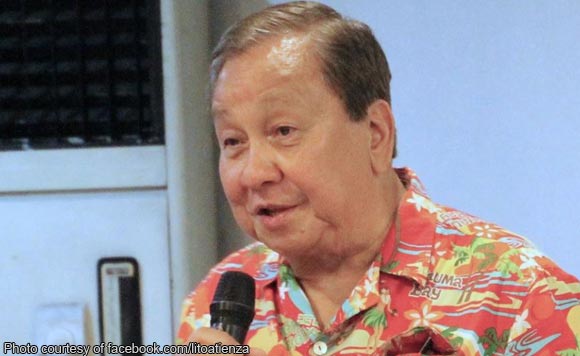 0 665
Share
Want more POLITIKO News? Get the latest newsfeed here. We publish dozens and dozens of politics-only news stories every hour. Click here to get to know more about your politiko - from trivial to crucial. it's our commitment to tell their stories. We follow your favorite POLITIKO like they are rockstars. If you are the politiko, always remember, your side is always our story. Read more. Find out more. Get the latest news here before it spreads on social media. Follow and bookmark this link. https://goo.gl/SvY8Kr

A minority lawmaker has expressed support for President Duterte’s plan to invest another P17 billion to expand the capacity of commuter trains in Metro Manila and nearby provinces, citing their social and economic benefits.

Atienza, former three-term mayor of Manila, is counting on the development of railways to improve mobility in a big way and to eventually help eases overall road congestion.

“Once we have more trains all around, people are bound to rely less on cars when going to work or school, simply because they are able to save a lot of time and cut down on fuel as well as parking expenses,” the House deputy minority leader said.

The proposed P3.767-trillion national budget for 2018 has some P17 billion in new appropriations to support rail projects, including:

• P4.8 billion in subsidy to the Metro Rail Transit (MRT) 3, plus P1.0 billion for increased capacity;

• P1.2 billion for the Unified Common Station Project at SM North EDSA and TriNoma malls in Quezon City, designed to enable 500,000 commuters daily to conveniently transfer from one line to another between MRT 3, LRT Line 1 and MRT 7, the 22.8-kilometer line now under construction from North Avenue, Quezon City to San Jose del Monte, Bulacan via Commonwealth Avenue;

• P608 million for the LRT Line 2 Manila Extension Project, the three-kilometer line from Recto Avenue to Pier 4 North Harbor; and