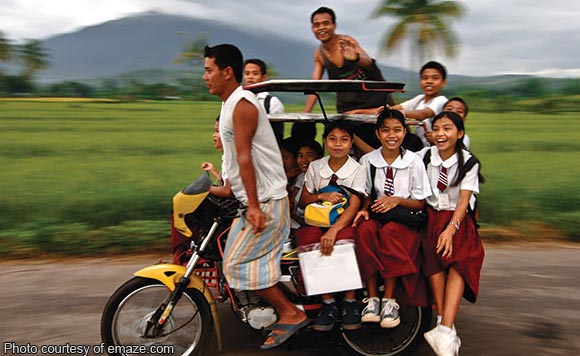 0 668
Share
Want more POLITIKO News? Get the latest newsfeed here. We publish dozens and dozens of politics-only news stories every hour. Click here to get to know more about your politiko - from trivial to crucial. it's our commitment to tell their stories. We follow your favorite POLITIKO like they are rockstars. If you are the politiko, always remember, your side is always our story. Read more. Find out more. Get the latest news here before it spreads on social media. Follow and bookmark this link. https://goo.gl/SvY8Kr

Quezon City Mayor Herbert Bautista is calling on parents to pay extra attention to the safety of their children by not letting them ride overloaded tricycles.

The mayor likewise reminded parents to follow the Motorcycle Safety for Children Act which prohibits children from riding motorcycles.

“Don’t put the life of your child in peril. The laws are there to safeguard public safety. With or without law enforcers, we should follow the law to the letter as these were enacted for the welfare of the general public,” Mayor Bautista said.

Mayor Bautista has ordered Quezon City’s Department of Public Order and Safety (DPOS) to prioritize the safety of the students when more than two million students in the metropolis begin to flock the streets for the opening of classes on Monday, June 5.

The DPOS has started deploying additional traffic constables in the city’s major thoroughfares such as Quirino Highway, Aurora Boulevard, Commonwealth and Katipunan Avenues.

DPOS constables will also be deployed in schools on Monday.

The 413-strong DPOS traffic constables will be deployed all over key areas in the city as early as five in the morning and will be on hand until seven in the evening.

The QC Tricycle Regulatory Unit (TRU) will also be inspecting tricycles and will apprehend overloaded tricycles.

Aside from the students who will be flocking the streets on Monday, DPOS is also prepared for any traffic congestions bought by road repairs, maintenance, especially the construction of MRT 7.