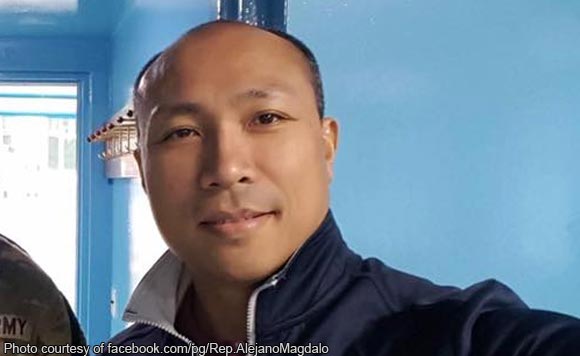 Magdalo party-list Rep. Gary Alejano has urged President Rodrigo Duterte to fire government officials with ties to the communist movement after the peace talks were put on hold.

Alejano, a former soldier, said the Communist Party of the Philippines-New People’s Army-National Democratic Front (CPP-NPA-NDF) are expected to pursue its goal of overthrowing the government now that negotiations have been suspended.

“I, therefore, urge the Duterte administration to cleanse its bureaucracy of members of CPP-NPA-NDF so as not to place the security of the country in unnecessary and unwanted dangers,” he said in a statement Saturday (May 27).

Duterte has chosen two leftist leaders to be part of his Cabinet: Rafael Mariano as agrarian reform secretary, and Judy Taguiwalo as social welfare secretary.

Other known leftist leaders who have joined the administration are former Gabriela party-list Rep. Liza Maza as head of the National Anti-Poverty Commission, and former Kabataan party-list Rep. Terry Ridon as chair of the Presidential Commission on the Urban Poor.

Presidential peace adviser Jesus Dureza announced that the government will be holding off talks with the CPP after it ordered the NPA to stage more attacks following the declaration of martial law in Mindanao.

The government has held four rounds of negotiations with the communists since the start of the Duterte administration.

While calling the suspension of peace talks with the communists “unfortunate,” Alejano said he backs the government’s decision since the NPA has continued to ambush people and destroy properties despite the “goodwill” shown by the administration in pursuing the negotiations.

Another incident which the lawmaker said cast doubt on the communists’ desire to pursue peace is CPP founder Jose Ma. Sison’s admission that the NDF doesn’t have control over the rebel soldiers on the ground.

“[This] implies that whatever agreements that GRP and NDF will arrive at may not be honored by the NPA,” he said.