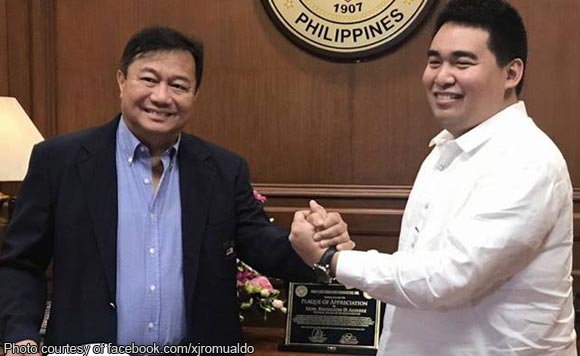 Sessions here and there at the House of Representatives won’t take away the smile of this lawmaker.

For the most part, Camiguin Rep. Xavier Jesus “XJ” Romualdo was serious while hearings were ongoing at three of his House committees: legislative franchises, ways and means, and trade and industry.

Romualdo was clearly, happy though, being seated next to Star for All Seasons and Batangas Rep. Vilma Santos-Recto on a hearing of the way and means committee.

He got a bigger smile when Oklahoma City Thunder’s Enes Kanter paid him a visit, and also signed his basketball.

What made him happiest? Taking his oath as a new member of President Duterte’s political party, the PDP-Laban, in front of Speaker Pantaleon Alvarez.

The politiko was originally a member of former President Noynoy Aquino’s Liberal Party during the 2013 polls, but jumped to former President Gloria Macapagal-Arroyos’s Lakas-CMD in February.

Will Romualdo find his true happiness at PDP-Laban?