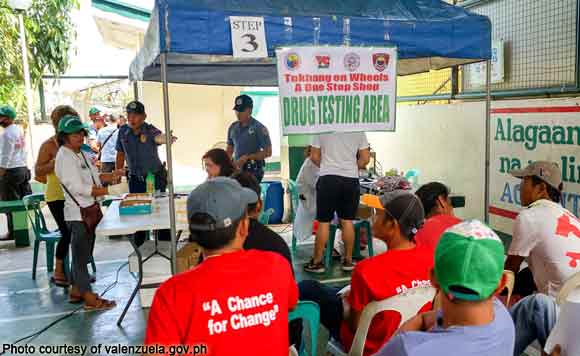 0 499
Share
Want more POLITIKO News? Get the latest newsfeed here. We publish dozens and dozens of politics-only news stories every hour. Click here to get to know more about your politiko - from trivial to crucial. it's our commitment to tell their stories. We follow your favorite POLITIKO like they are rockstars. If you are the politiko, always remember, your side is always our story. Read more. Find out more. Get the latest news here before it spreads on social media. Follow and bookmark this link. https://goo.gl/SvY8Kr

The City Government of Valenzuela City has launched another innovation in local governance with the pilot run of its mobile drug-testing program.

“Such initiative is a first of its kind in the Philippines and is expected to draw supports from the local and national agencies, as well as the communities,” the mayor said.

“Advance testing kits are being used in the program to obtain results instantly,” he added.

During the first day of the mobile drug testing, around 179 individuals surrendered themselves to the procedure.
Gatchalian said expert city doctors who are accredited by the Department of Health (DOH) to perform drug dependency evaluation (DDE) assessed those who have turned positive.

Following the principles of the city’s comprehensive anti-drug support program, the Valenzuela City Cares Plus, or simply, VC Cares Plus, the positive-testers will either be sent to a center-based or a community-based rehabilitation facility.

“They will spend three to five days per area or until all communities in that area have been covered,” Gatchalian explained.

Recorded surrenderees shall then be endorsed to the Tokhang-on-Wheels one-stop-shop which is scheduled to make rounds based on preferred number of individuals.