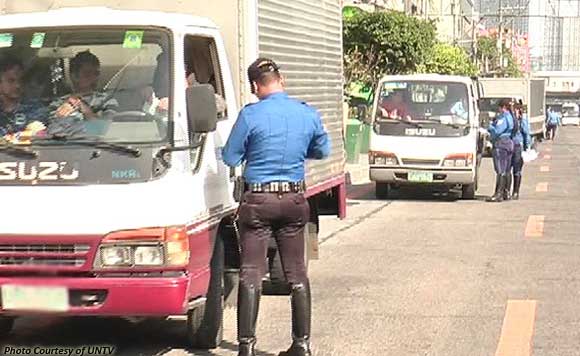 0 929
Share
Want more POLITIKO News? Get the latest newsfeed here. We publish dozens and dozens of politics-only news stories every hour. Click here to get to know more about your politiko - from trivial to crucial. it's our commitment to tell their stories. We follow your favorite POLITIKO like they are rockstars. If you are the politiko, always remember, your side is always our story. Read more. Find out more. Get the latest news here before it spreads on social media. Follow and bookmark this link. https://goo.gl/SvY8Kr

Quezon City Mayor Herbert Bautista has signed into law an ordinance banning trucks and other heavy motor vehicles from using the stretch of Sauyo Road and Old Sauyo Road.

The move, which is in accordance with the modified truck ban policy of the Metropolitan Manila Development Authority (MMDA), is meant to ease congestion along Sauyo Road and Old Sauyo Road, from Mindanao Avenue to Dahlia Street in Barangay Fairview and Quirino Highway in Novaliches.

As provided for under Ordinance 2572-2017 introduced by Councilor Eric Medina, violators shall be dealt with a fine of P5,000 or an imprisonment of one year or both at the discretion of the court.

The city’s Department of Public Order and Safety (BPLO), QC Police District – Traffic Department and the MMDA have been tasked to oversee the strict implementation of the ordinance.

Meanwhile, motor vehicles owned by or under contract with the government will be provided exemption from the city’s truck ban policy along Sauyo Road.#