Take it from Erap: Two impeachment complaints bad for PH 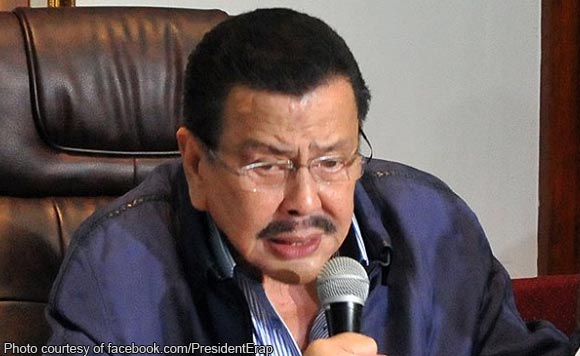 Having two separate impeachment complaints against the country’s top two leaders will not bring any good to the country, Manila Mayor Joseph “Erap” Estrada said on Wednesday (March 22).

Estrada is crossing his fingers that both impeachment bids – one for President Duterte and the other one for Vice President Leni Robredo – will not prosper.

“First time sabay ‘to, ha, President and Vice President, that will really delay the progress of our country. I hope it will not happen. Let’s pray it’ll not prosper,” the former president said.

“Whether against the president or vice president, hindi ako pabor. They are elected by the people. They’re both in their first year in office. Why not give them a chance?” he added.

Such moves to unseat the country’s leaders this early, Estrada stressed, will undermine and disrupt what the government has been doing, especially the current campaign against illegal drugs.

Recalling the time he was impeached by Congress back in 2000, Estrada said the impeachment complaint filed against him at that time only interrupted his programs.

“Just like what happened to me, di ba? They filed an impeachment complaint against me, kaya na-delay nang delay mga program ko, walang nangyari,” Estrada recounted.

“Kaya I don’t believe in this impeachment-impeachment. Ewan ko ba, puro… too early for politics. We will not move forward,” he further said.