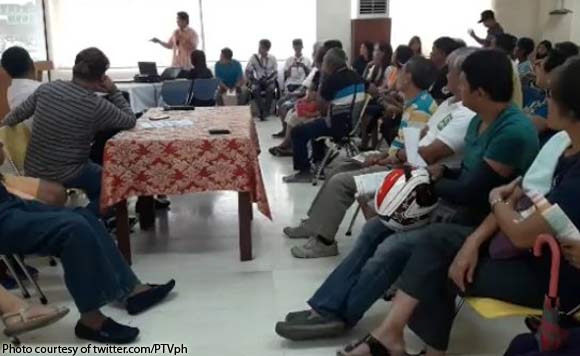 The city government of Makati led by Mayor Abby Binay on Wednesday conducted a dialogue with residents of Barangay Rizal to raise awareness about the West Valley Fault.

In particular, the lady politiko warned those residing within the five-meter easement on both sides of the fault–declared as “danger zones”–of the risks they face if they do not relocate.

The Makati Disaster Risk Reduction and Management Office (MDRRMO) has organized a series of dialogues for Rizal and three other barangays transected by the fault line as part of the city’s thrust of building resilient and sustainable communities.

Speaking in front of over 345 residents and officials of Rizal, Mayor Binay prodded the concerned residents to relocate for their own safety. This, as seismologists say the fault is already ripe for movement and could trigger a 7.2-magnitude earthquake in Metro Manila.

“We cannot predict exactly when the earthquake will happen, but it is inevitable. Earthquakes are not like typhoons which can easily be detected through weather instruments. Thus, we must not be complacent,” the mayor said.

Currently, there are 99 lots tagged within the Rizal danger zone. Comembo has eight lots, Pembo has 93, and East Rembo, 113.

Binay said that although there will be no forced eviction for residents who refuse to relocate, they will be asked to sign a waiver stating that they accept the risks, and that they expect no assistance from the city government. She also clarified that the city government will not purchase affected lots.

“Mas importante ang buhay kaysa materyal na bagay,” said the mayor in response to concerns about investments made by residents in building their homes.