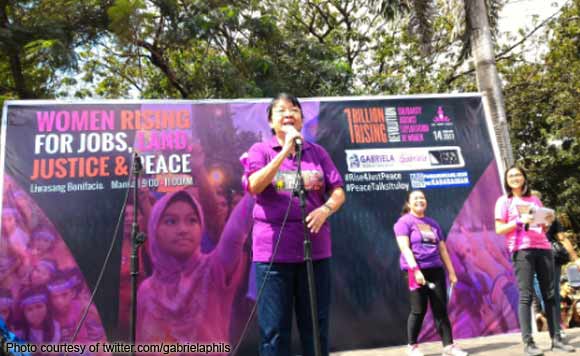 0 572
Share
Want more POLITIKO News? Get the latest newsfeed here. We publish dozens and dozens of politics-only news stories every hour. Click here to get to know more about your politiko - from trivial to crucial. it's our commitment to tell their stories. We follow your favorite POLITIKO like they are rockstars. If you are the politiko, always remember, your side is always our story. Read more. Find out more. Get the latest news here before it spreads on social media. Follow and bookmark this link. https://goo.gl/SvY8Kr

The Department of Social Welfare and Development (DSWD) on Tuesday joined the One Billion Rising (OBR) global activity in Liwasang Bonifacio, and called for the resumption of peace talks between the government and the National Democratic Front of the Philippines (NDFP).

Social Welfare Secretary Judy Taguiwalo said they joined the tradition as a show of solidarity for the global call to end any form of violence against women.

One Billion Rising began in 2012 as a call to action based on the staggering statistics that one in three women in the world — adding up to more than one billion women and girls — will be beaten or raped during her lifetime.

Every year, the movement enjoins people across the world to express their outrage and to strike, dance, and rise in defiance of the injustices that women are subjected to.

On the fifth year of the OBR, the DSWD, as the lead agency that provides social protection to women and vulnerable sectors, formally joined the activity, also to highlight their call for the resumption of the peace talks.

“It is important that we will be able to address the root cause of violence against women. That is why I and the whole department are supporting the call to continue the peace talks,” Taguiwalo said, noting that the peace talks cover the comprehensive agreement on socio-economic reforms, livelihood, true implementation of land reform, ending of contractualization, free education for all, and others.

She pointed out that her department has joined the call for the resumption of peace talks because only in times of peace could women make plans on how to enhance their families’ lives, improve their livelihood, ensure their children’s education, and access basic services.

She thus called for unity in ending the roots of armed conflict.

Meanwhile, Taguiwalo said the OBR was observed by some schools in Metro Manila and in the provinces, while employees of the DSWD central office and its office in the National Capital Region joined the Gabriela Women’s Party, led by Rep. Emmie de Jesus, OBR global director Monique Wilson, concerned artist Maria Isabel Lopez and her daughter, and other groups in a dance.

Wilson said the country’s participation in the 48-hour OBR is in support of this year’s theme of “solidarity against the exploitation of women”, as well as the call for jobs, land, justice and peace for women.