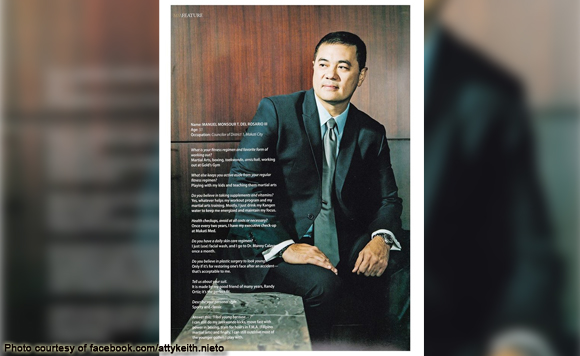 0 671
Share
Want more POLITIKO News? Get the latest newsfeed here. We publish dozens and dozens of politics-only news stories every hour. Click here to get to know more about your politiko - from trivial to crucial. it's our commitment to tell their stories. We follow your favorite POLITIKO like they are rockstars. If you are the politiko, always remember, your side is always our story. Read more. Find out more. Get the latest news here before it spreads on social media. Follow and bookmark this link. https://goo.gl/SvY8Kr

Makati City Representative Monsour del Rosario has his own take on #ThrowbackThursday. This time, he did it in a suit.

On his Facebook account, the Politiko posted a snap of the March 2016 copy of Metro Society Magazine, under the ‘Portraits of a Gentleman’ feature. He wrotw: “Before Thursday ends, let me share this captured moment in the recent past,”

He narrated the premise of the magazine stint, sharing that he was included in the list of “ageless men”, dressed up in suits who defy time and aging: “those who defy their vigorous energy, youthful good looks, and undeniable boyish charms. The select few were handpicked not just for their fashion sense and outright appeal, but also for their active lifestyles as well.”

The Politiko happily shared how honored and flattered he felt being included in the list alongside other celebrities, Politikos and personalities.

“Along with Senator Sonny Angara, Actor Freddie Webb, Designer Kenneth Cobonpue and other notable men in our society, yours truly reminisces this captured moment and would like to share it to you all.”

So what makes Monsour del Rosario young? “As I have said in this feature: “I feel young because I can still do my taekwondo kicks, move fast with power in boxing, train for hours in F.M.A. (Filipino martial arts) and finally, I can still outdrive most of the younger golfers I play with”.